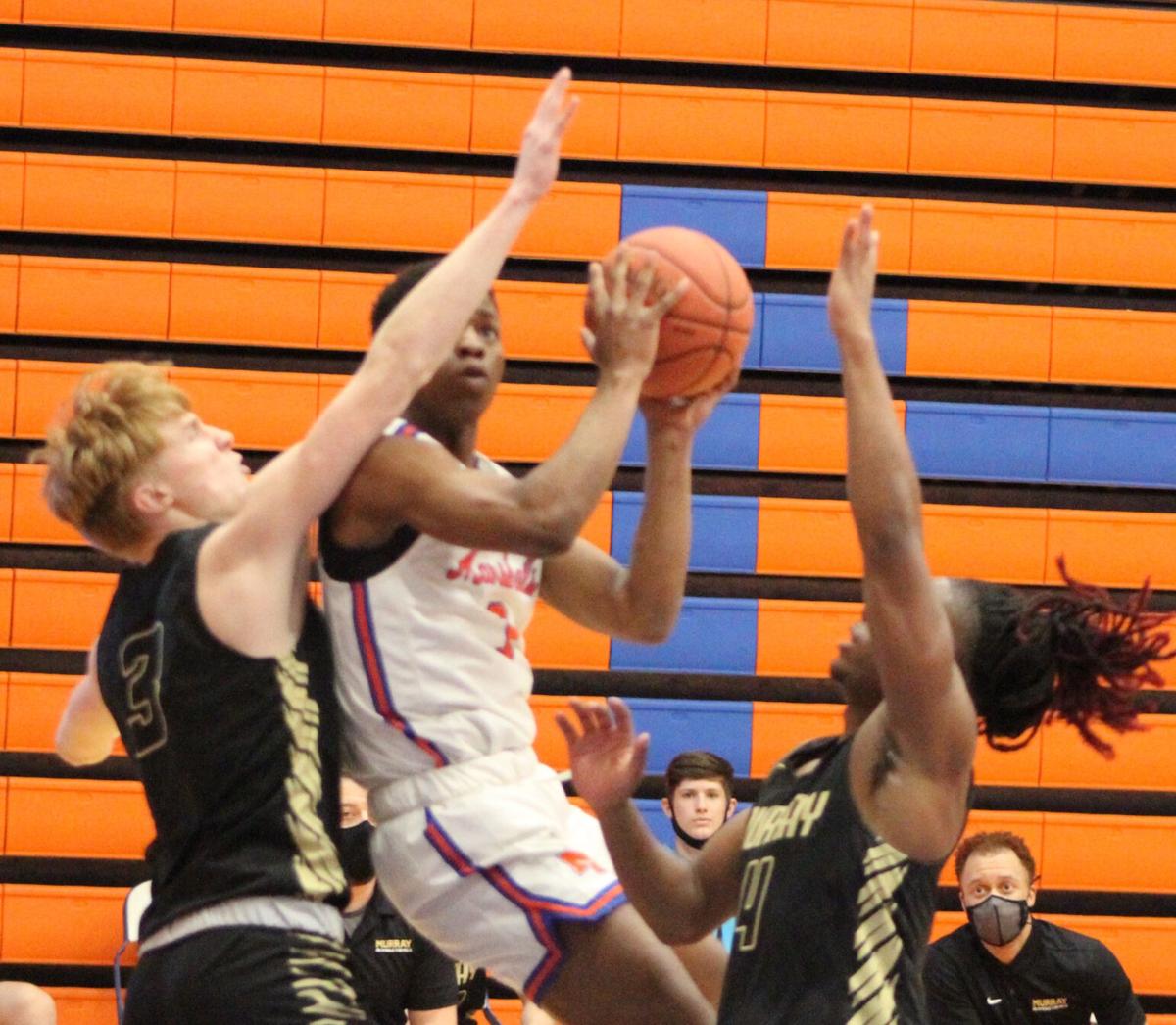 Zion Harmon floats toward the basket for 2 of his team-high 20 points over Murray High Tuesday. 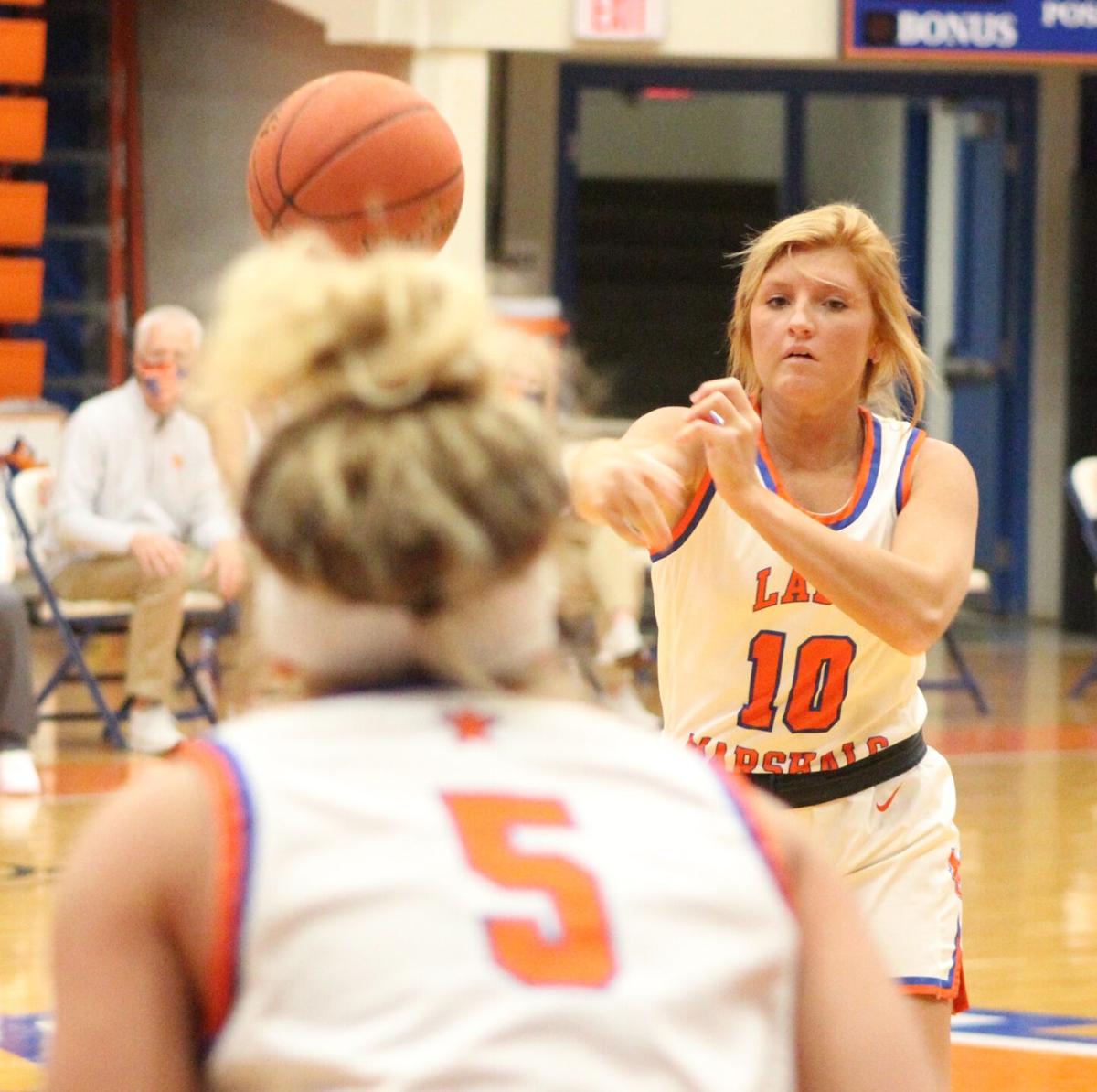 Gabbi Lovett (10) passes to teammate Layne Pea in the first half of Tuesday's district meeting with Murray.

Zion Harmon floats toward the basket for 2 of his team-high 20 points over Murray High Tuesday.

Gabbi Lovett (10) passes to teammate Layne Pea in the first half of Tuesday's district meeting with Murray.

Despite a three-point second quarter, Marshall County wasn’t about to simply fade away in the final 16 minutes to Murray. No, the Marshals turned it up and turned it on.

Trailing 25-16 entering the second half Tuesday, Marshall County went on a 12-5 run off scoring from Zion Harmon and Quinn Smith and remained close to the Tigers, 35-31, entering the final frame of play.

There, the Marshals got on another tear sparked by Riley Smith’s outta-nowhere 3-pointer that pulled even to Murray, 38-38, with 4:46 to go. Harmon delivered a dazzling reverse layup for Marshall’s first lead since the end of the opening period, and a turnaround jumper by Smith and a dagger trey by Harmon helped set up a 51-49 comeback win for the hosts.

The game marked a regular season sweep of the Tigers that moved Marshall County to 8-8 on the year, but it also kept the Marshals alive in the chance to claim the Fourth District top seed and an automatic spot in the First Region tournament.

Marshall is now 2-1 in the district with 1-2 Calloway County waiting in a Saturday showdown at Reed Conder Gymnasium. The 6-10 Lakers edged the Marshals 75-74 in their meeting on Jan. 15.

Coming off a 52-47 overtime thriller Monday against Calloway, Murray (12-7, 2-2 in the district) trailed 7-2 and 11-6 early against Marshall County before getting on a 19-5 run by halftime. In the second quarter, the Tigers took advantage of eight Marshal turnovers to claim a seemingly solid lead and stifle the hosts to just three points in the frame.

Harmon had 20 points, which included four 3-pointers. Smith followed with 15 with a 7-of-8 night at the free throw line.

Murray’s Grant Whitaker delivered with 24 points to lead all scorers with 20 of those from the field.

The Tigers will wrap up their season Friday at Mayfield. Marshall County continues its home stand with a Friday meeting with St. Mary, Saturday’s district bout with Calloway County, and then a finale hosting Hopkins County Central next Tuesday.

A 3-point barrage – nine in the first half and 13 for the game – dealt an early knockout blow to the Lady Tigers, who mustered two points in the first quarter, four in the second, one in the third and three more in the fourth to fall to the second-ranked team in the Kentucky Girls’ Associated Press basketball poll, 65-10.

The district win gave Marshall County a 4-0 regular season record for the second straight season, while also improving to 18-1 heading into Saturday’s final contest at Southwestern in Somerset, Kentucky.

It may have been Senior Night but junior Jada Driver made it her night with a game-high 19 points; 15 of that coming from beyond the 3-point arc. Driver made four treys in the first quarter alone, when Marshall County led 21-2. Her final one came seconds into the second frame.

Layne Pea, Cayson Conner and Presley Jezik all sank two 3s, with Mia Teague and Sophie Galloway adding a triple of their own. Conner tallied 14 points, followed by Jezik’s 10.

Lady Marshal coach Aaron Beth said another dominating outing should give his team added confidence as they close out the regular season against 14th-ranked Southwestern.

“That goal is the same height and 3-point line is the same distance no matter who we’re playing. We just have to be confident and take shots when they’re open,” he said. “We’ll utilize our inside game a little more. Tonight we didn’t have to because the shots were open and they were falling and our pressure defense was what we needed it to be. “