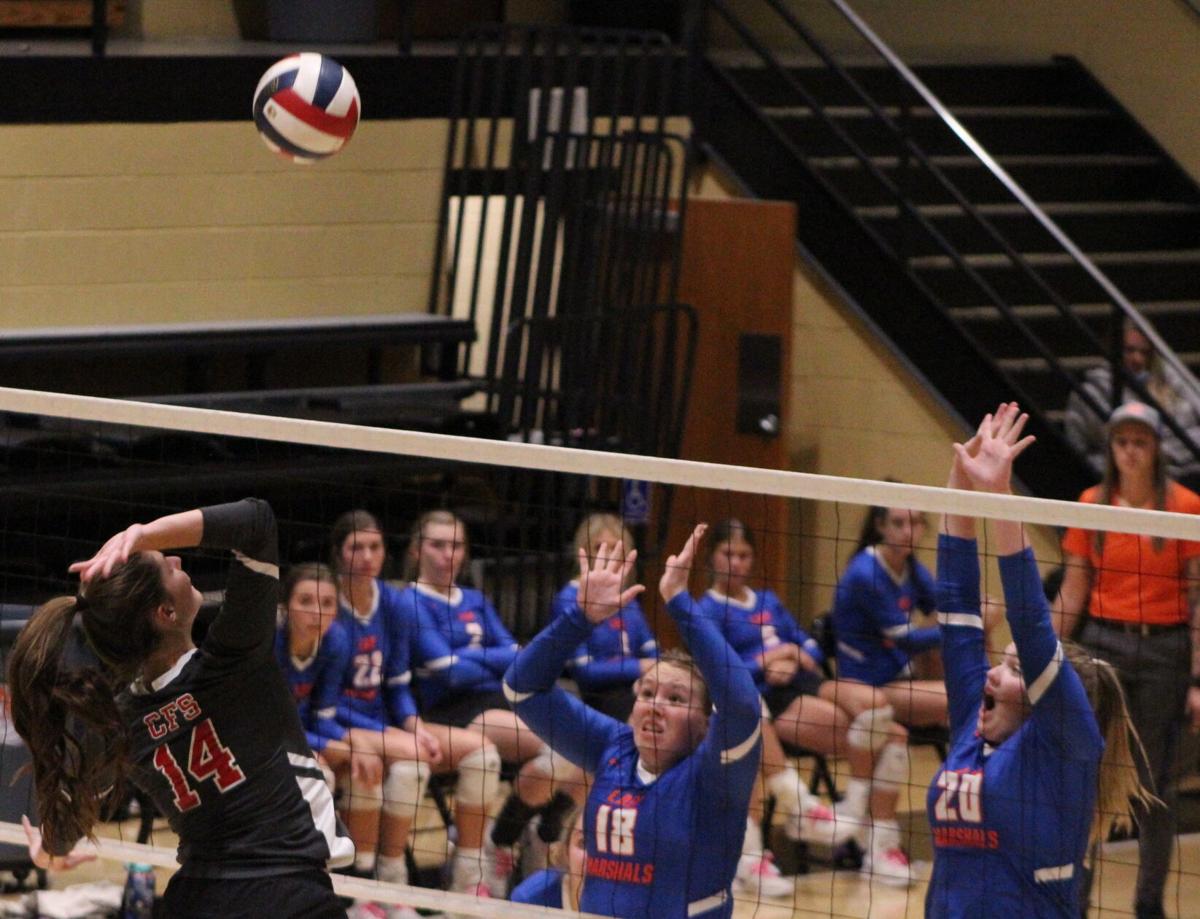 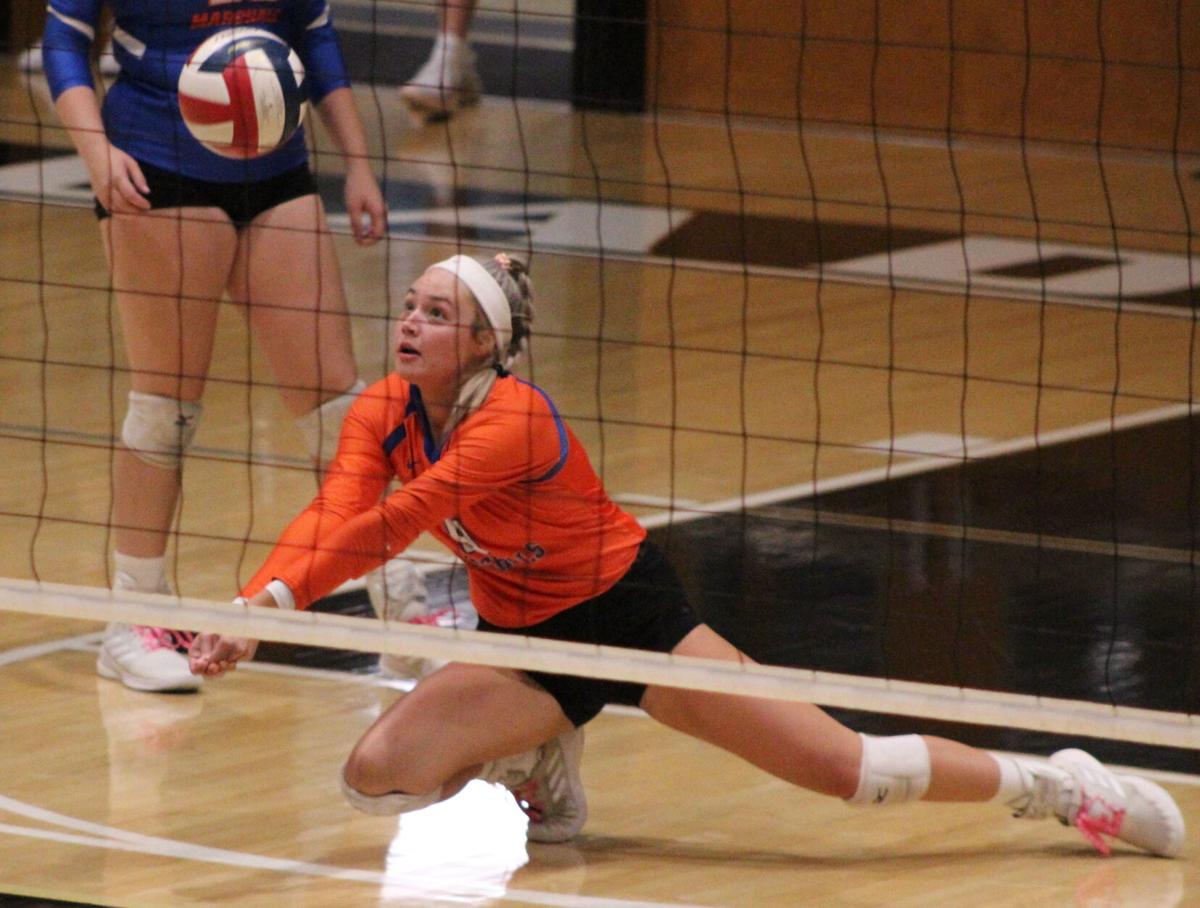 Marshall County libero Ashley Brimmerkamp digs out a serve to keep the game going against CFS Tuesday for the Fourth District championship. 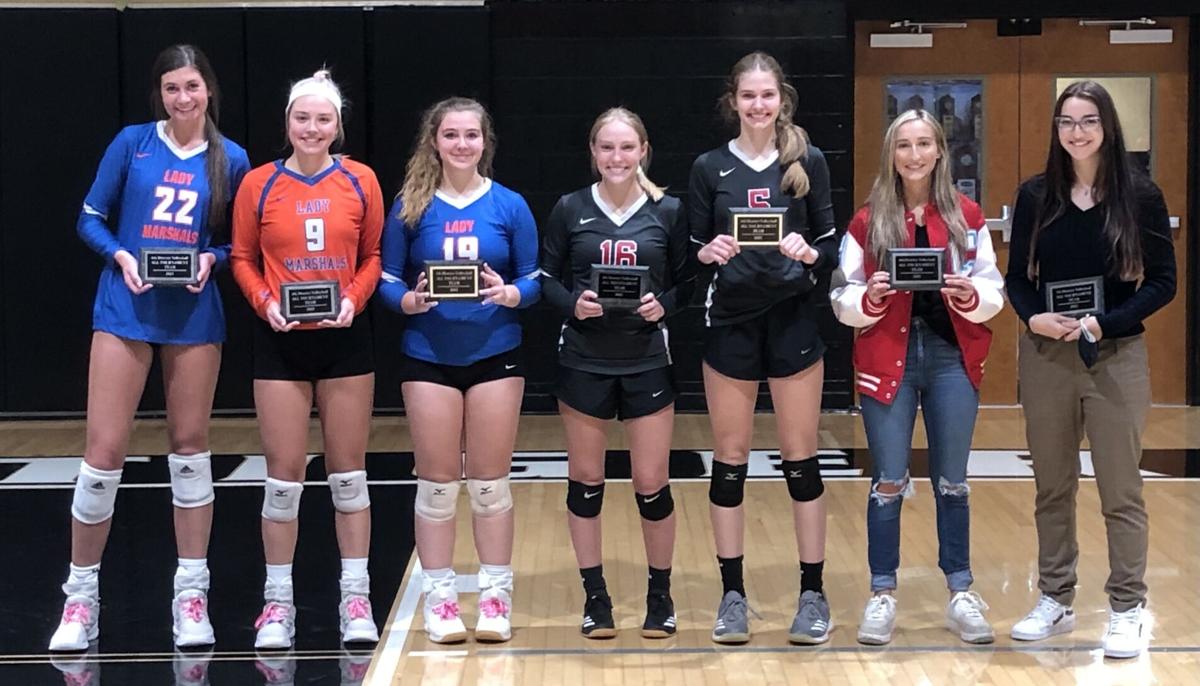 Marshall County libero Ashley Brimmerkamp digs out a serve to keep the game going against CFS Tuesday for the Fourth District championship.

It takes 25 minutes to get from Draffenville to Murray, the site of this week’s Fourth District volleyball tournament. But the distance between the two teams in Tuesday’s finals — Marshall County and Christian Fellowship — is just a solid serve away from each other across U.S. 68.

To paraphrase the old saying: It’s not the journey, it’s the destination. Both teams had already punched their tickets to next week’s First Region tournament, but the Lady Marshals and Lady Eagles still wanted to go into it as district champs.

Marshall County claimed their back-to-back titles in commanding fashion with a 3-0 win. But to do so, the Lady Marshals had to traverse a never-say-die Christian Fellowship club that was the lone district team to hand Marshall a loss in the regular season.

It was the Lady Eagles who dominated early in the first set behind Lilli Burnett and Cori Hood and built an 11-4 lead.

But Marshall calmly rallied by outscoring CFS 10-3 to knot things, 14-14. But it wasn’t until 21-20 that the Lady Marshals went up on the Lady Eagles and managed the opening 25-21 win.

Marshall County coach Alyssa Finnegan had said she wanted to see more consistency in her team after dispatching Murray in Monday’s semifinals, 3-0.

It was still elusive but she said her team did find its grit in that first set that set a tone for the night.

“It proved we’re not going to roll over and let a team beat us,” the first-year head coach said. “I think that’s something I can’t coach and that’s something that’s within the girls. That’s awesome that they contain that.”

In the second set, Marshall reversed the roles and took a 5-1 lead before Christian Fellowship went ahead off a Gracie Howard ace, 9-8.

Both teams jockeyed for position until Sarah Bremmerkamp’s tip put the Lady Marshals ahead, 22-21, and carried them to a 25-23 second set win.

By the third set, the Lady Marshals were firmly in control and took advantage of several CFS errors and four aces by Alyssa McClain that helped establish a 22-7 lead.

Hood’s tip broke the Lady Eagles into double digits before Halle Langhi’s push over the net sealed their win, 25-10.

Along with both Marshall County (20-5) and Christian Fellowship (21-14), Carlisle County and Hickman County from the First District, McCracken County and Paducah Tilghman of the Second District, and Ballard Memorial and Graves County from the Third District will make up the regional tournament.

“We’ll have a challenge ahead of us and we’re looking forward to it,” Finnegan added.