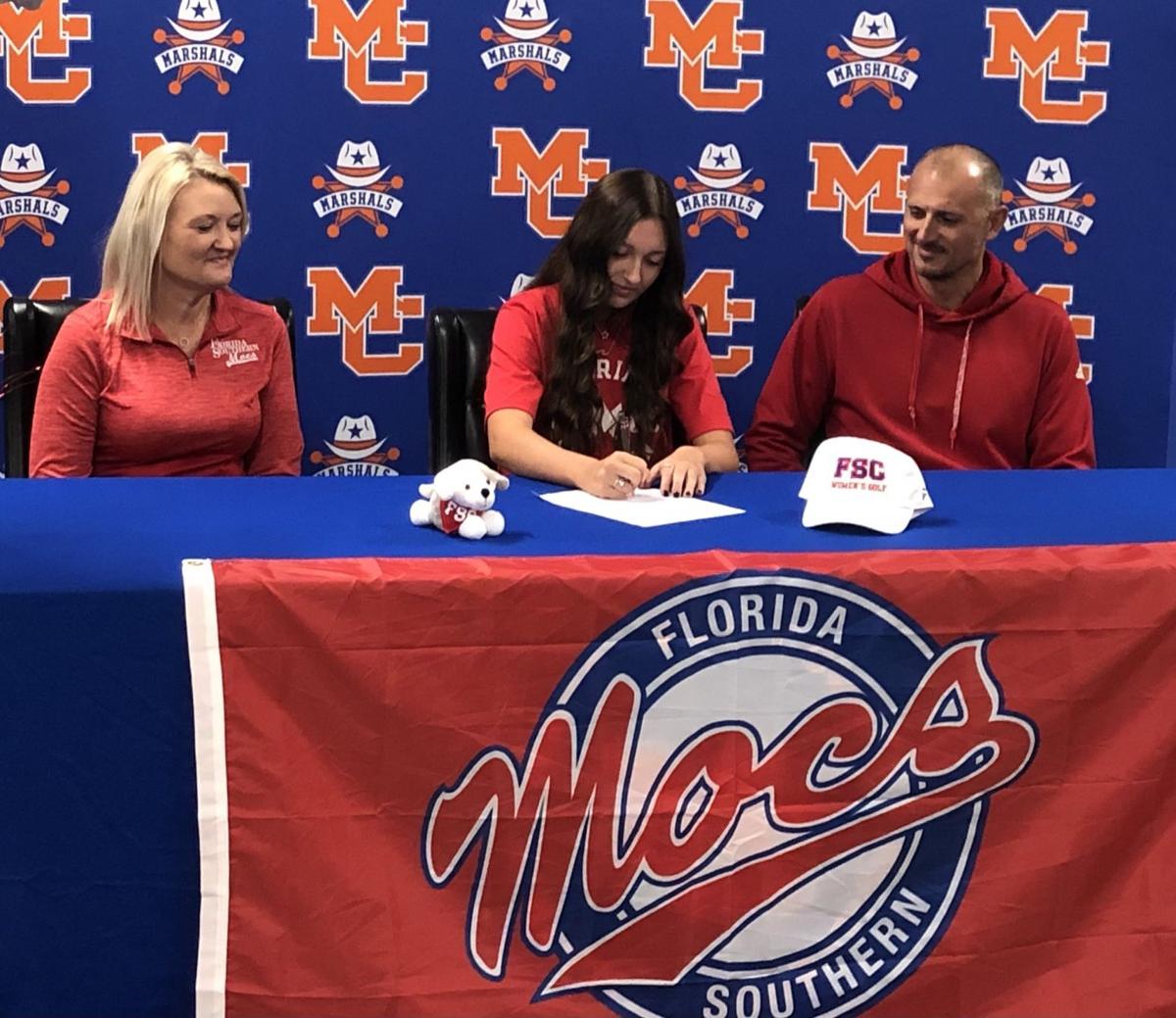 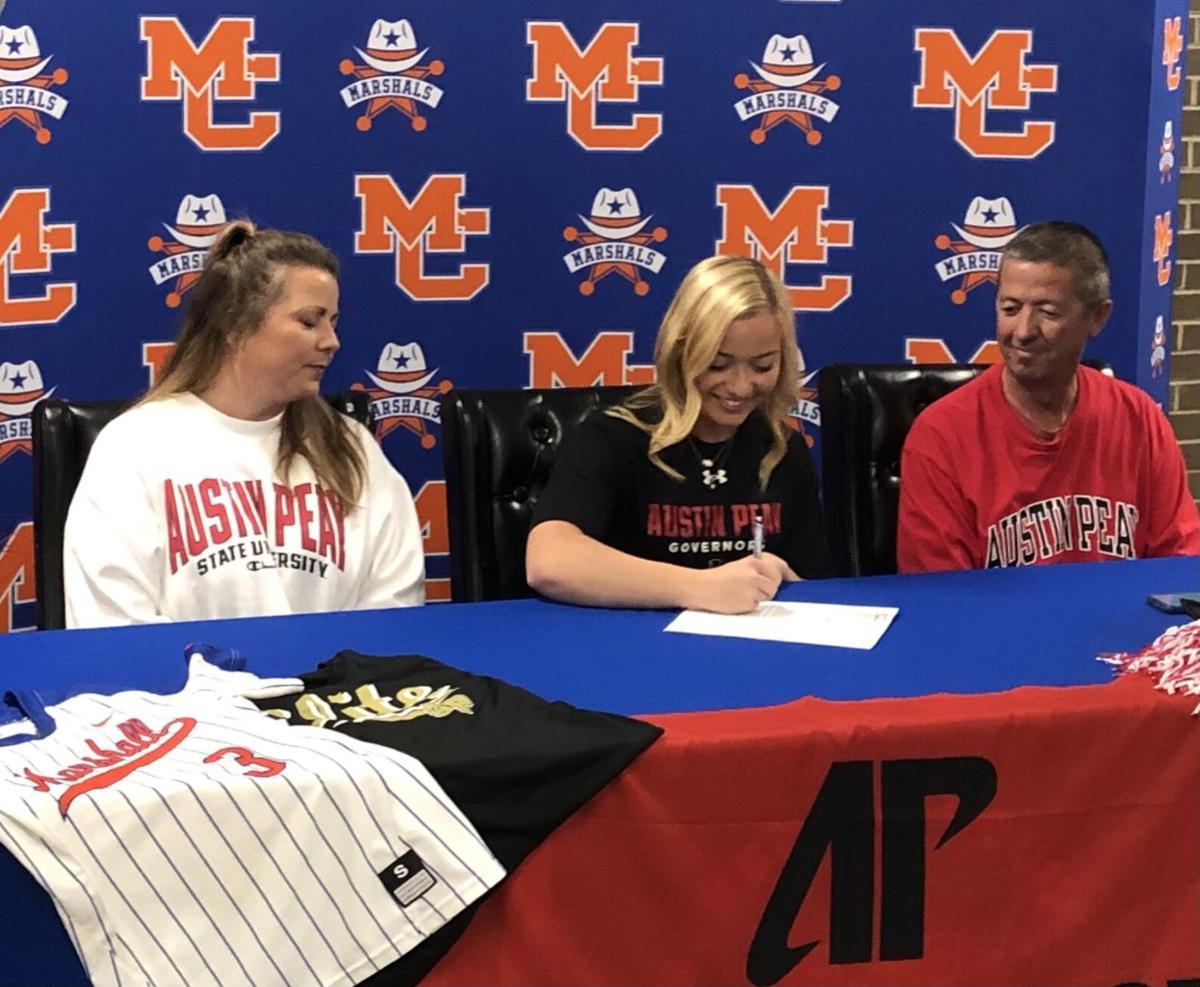 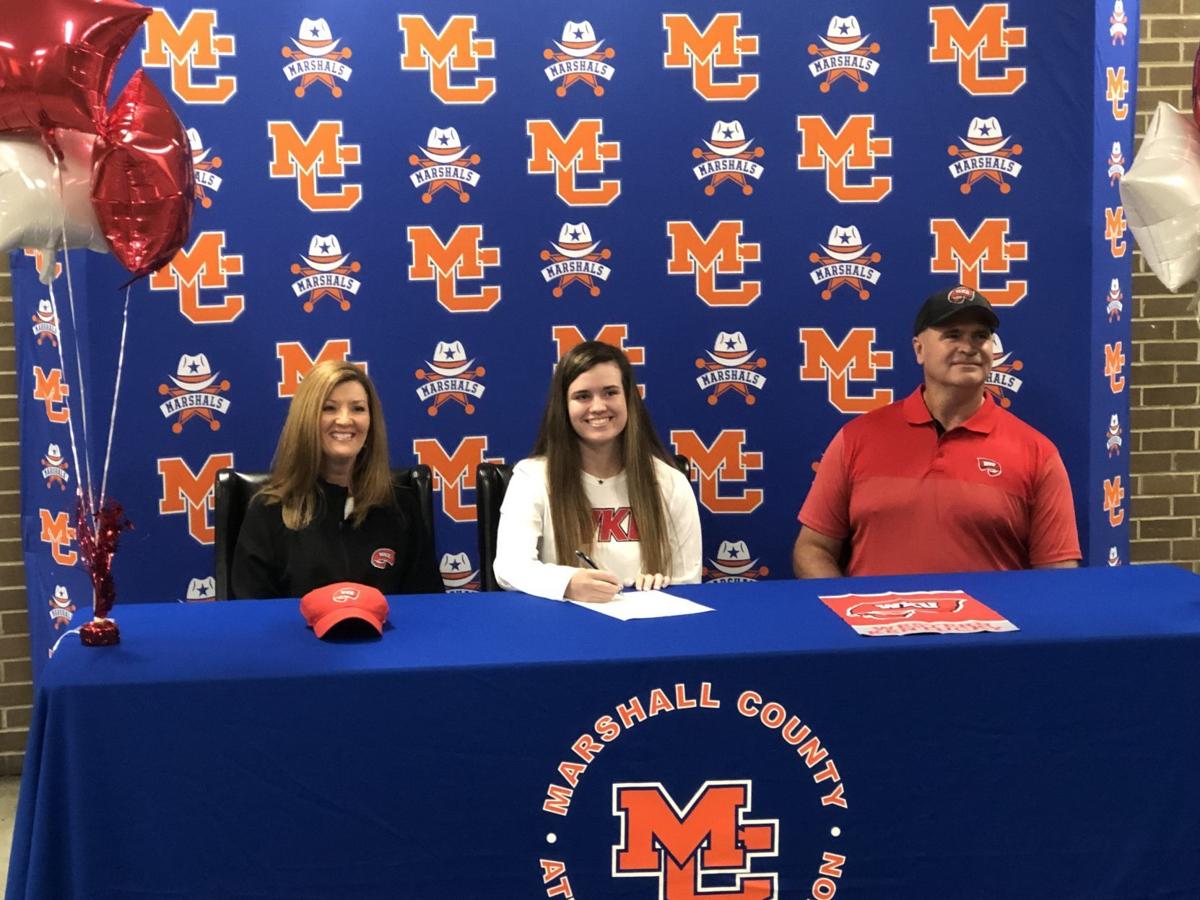 Bowling Green has been extremely good to Marshall County’s golf team, including senior Savannah Howell. And as a future Western Kentucky University golfer, Howell hopes it continues to be.

She, along with fellow Lady Marshal golf teammate Megan Hertter and softball standout Charley Pursley signed their national letters of intent last Wednesday with family and friends in attendance. As Howell heads to the Hilltoppers, Hertter signed with Florida Southern College and Pursley with Austin Peay State University.

Both Howell and Hertter have played beyond their four high school years with Marshall County. Howell has played golf for the Lady Marshals since she was in fifth grade and has made eight trips to the KHSAA State Girls Golf Championship. Hertter has competed over a six year span and went to state all of those years.

The two were also key pieces to the Lady Marshals’ back-to-back state titles in 2020 and 2021.

“It’s unbelievable how much they’ve done for this program,” said MCHS head coach Aaron Beth. “Their four years in high school they’ve finished fourth, third and two state championships. Super kids, super student athletes, both do great in classroom and I know they’re going to go off and do great things in college.”

Howell, who plans to major in finance, said signing to take the next step in her athletic career is an exciting time.

“I’ve been playing high school golf for such a long time, but it’s also nerve-wracking at the same time because it’s something new,” she said.

Hertter, who plans to study psychology and criminology at the Lakeland school, said it was a dream come true. “I’ve worked so hard to be able to sign with any college. To be able to follow through with my dreams and go to Florida is amazing.”

Howell, the daughter of Jon and Stacey Howell, has been a first team all-state golfer from 2019-2021 and was an all-region player her entire high school stint. In the All-State Championship, she finished eighth in 2019, third in 2020 and 11th in 2021, and was eighth, fifth and 11th in her last three state championship runs, respectively.

Hertter, the daughter of Donnie and Bobbie Hertter, has been on the all-region team since eighth grade and second team all-state for two years. She recorded six individual wins and 18 top five finishes in her junior and senior seasons. Her resume includes the 2020 Justin Thomas Grant and being named to the Bluegrass Golf Tour All-Stars, as well as winning The Paducah Sun’s Florence Paxton Memorial Golf Tournament and Cullen Brown Invitational this past year.

Howell said she looks to improve her ball striking and consistency as she tees up for WKU, while Hertter said she remains focused on improving her short game.

Beth said both have been consistent in their leadership, which helped the Lady Marshals earn their state crowns over the past two seasons.

“Overall their poise and their confidence and their leadership has led us to two state championships in two years,” he said. “Repeating is hard to do. This year was tougher than last year but their leadership really contributed to that success. We had those two seniors and a freshman, eighth grader and seventh grader that played in the state championship. Their examples and them being role models really impacted those young kids and hopefully they can continue on with the success that these two have set in place.”

To MCHS head softball coach Mallory Newton, Pursley is like having a coach on the field and feels Clarksville’s Governors will have that experience too.

“Charley is everything you want Marshall County softball to be. She’s not only a good athlete but also an extremely good girl,” Newton said. “Teammates always trust her to get the job done. She’s super responsible and includes everybody.”

Pursley has been volunteering with North Marshall Middle School’s softball team, where she has the tasks of preparing practice schedules and running various stations. “I would send her off with kids and I knew they would come back even better,” Newton added.

On the field, Pursley is an offensive gem having set school records her junior year with 50 stolen bases off 55 attempts, along with 65 hits in a single season. She was the inaugural Lady Marshal .500 Club member with a .500 batting average and .548 on-base percentage. She posted 23 RBIs this past year and delivered six doubles and six triples.

She was ranked 10th in the state in stolen bases and 11th in hits last season. Pursley, the daughter of Darrin and Courtney Pursley, has been an All-Fourth District and All-First Region player and represented Marshall County in the East-West All-Star Game.

A member of Atlanta Premier Tn-Wood travel team, Pursley said she is excited about the opportunity to play college ball at Austin Peay.

“I’m extremely blessed to be able to have this opportunity to play at the next level. I’ve worked really hard for this and I couldn’t be more excited,” she said.

As for finding the right fit in Clarksville, she added, “You hear people say you’ll know as soon as you set foot on campus and I couldn’t agree with that any more. I knew this was exactly where I was meant to be.”

With her plan to study health and human performance, Pursley has already established herself as a cross-fit instructor at Lake Barkley Cross-fit and as a regional champ with Marshall County’s 4×200 relay team. As a freshman, she was a second team all-state member for 3A. She has also been recognized as an all-state member in academics in both softball and track and field.