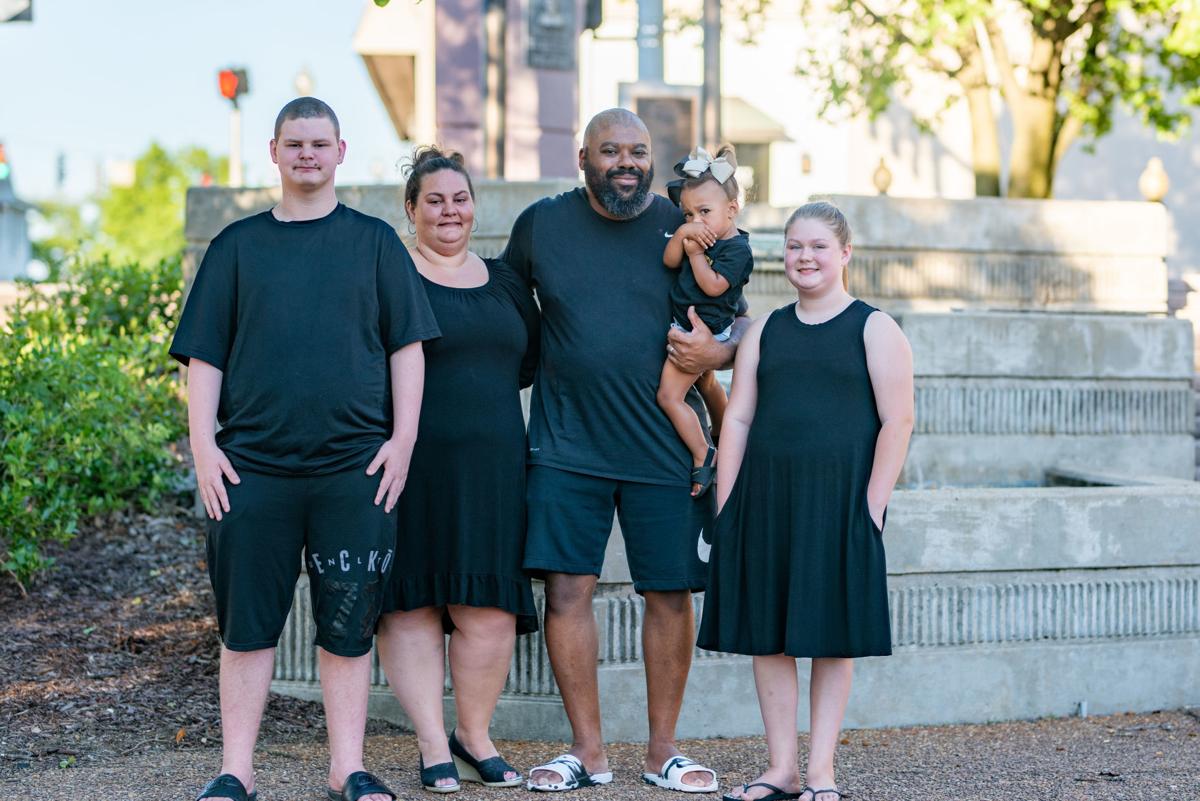 Benton couple Hope Davis (center-left) and Dwaylon Davis (center-right) and their children (from left) Kaden, 14, Avigail, 1, and Savannah, 11, stand near the Marshall County Courthouse on Thursday. The Benton couple organized protests in Marshall and Livingston counties in recent weeks, and they plan to host a series of conversations geared toward racial equality in the near future. 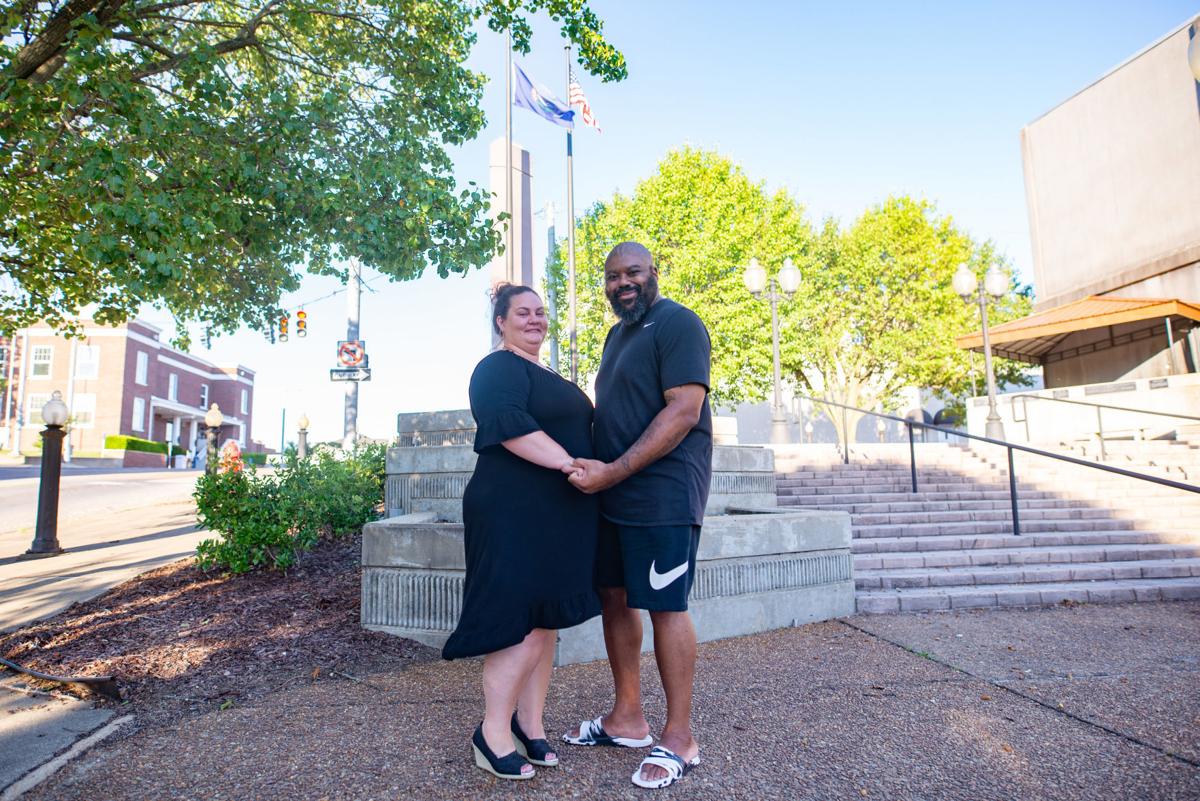 Hope Davis (left) and her husband, Dwaylon Davis, stand near the Benton courthouse Thursday. The two organized protests in Marshall and Livingston counties in recent weeks, and plan to host a series of conversations geared toward racial equality in the near future.

Benton couple Hope Davis (center-left) and Dwaylon Davis (center-right) and their children (from left) Kaden, 14, Avigail, 1, and Savannah, 11, stand near the Marshall County Courthouse on Thursday. The Benton couple organized protests in Marshall and Livingston counties in recent weeks, and they plan to host a series of conversations geared toward racial equality in the near future.

Hope Davis (left) and her husband, Dwaylon Davis, stand near the Benton courthouse Thursday. The two organized protests in Marshall and Livingston counties in recent weeks, and plan to host a series of conversations geared toward racial equality in the near future.

Growing up in Hopkinsville in the 1970s and ‘80s, Dwaylon Davis accepted racism as part of life — unfortunate but unavoidable.

“Sadly, it’s just something you get conditioned to,” said Dwaylon, 46, who lives with his wife, Hope Davis, and their family in Benton.

Frequent stops by police, especially if he was on foot, and the constant, intentional need to appear nonthreatening were realities Davis learned to live with.

“I was raised to treat everyone like I would want to be treated, but I was also taught how to be careful, how to make it home alive,” he said.

And yet, Dwaylon said he didn’t experience much overt racism until he moved to Mayfield in the late 1990s and found himself refused service or ignored at restaurants.

“People still had that mindset, that we’re not equal to them,” he said.

As a white woman growing up in the Jackson Purchase area, Hope, 35, said her childhood living in a diverse, low-income area gave her an appreciation for people regardless of race.

During her middle school years in Graves County, despite a mostly-white population, Davis said she didn’t notice much overt racism. That changed during her high school years in Marshall County.

“I didn’t know what racism was until then,” she said.

“I didn’t know that it was encouraged, or you were supposed to dislike someone because of the color of their skin.”

Phrases like “I like black people, but they have their place and we have ours” angered her, and she recalled often having to stand up to friends and family members who expressed such ideas.

Having been acquainted for nearly a decade and a half, together as a couple for five years and married for two, the Davis family is truly blended.

Hope has a 14-year-old son, Kaden, from a previous relationship, while Dwaylon adopted Savannah, 11, before his marriage to Hope. The two together adopted 1-year-old Avigail.

“That goes to the very core of our family, that equality is so important,” Hope said.

Both understand the perception of Marshall County as particularly problematic for race relations, though both said they’ve seen significant progress in recent years.

But when a Confederate flag flew at the Marshall County Courthouse in April at the behest of a county commissioner and with permission of the judge-executive, the normally quiet Dwaylon said he’d had enough.

“I’m all for history. History has its place, but that needs to be in a museum,” Davis said of the flag, which was not the typically seen battle flag.

And when the police-related deaths of Breonna Taylor in Louisville and George Floyd in Minneapolis sparked a nationwide movement of protests, the family decided to take an active role in their home community.

After attending the May 31 protest in Paducah that swelled to an estimated 1,000 people, they decided it was time Benton experienced the equality movement firsthand.

“We had so much support” for the protest, Dwaylon said, but his wife said they quickly ran into opposition, including threats toward their family.

“I was afraid my house was going to burn down with my children in it,” Hope said.

“I was afraid someone would get through our door, and what if the dog didn’t bark?”

But the two refused to be cowed, and an estimated 300 people showed up for the Benton event, which she called “beautiful.”

Across the #blacklivesmatter and broader racial equality movement, goals can be as diverse as participants. Some hope to abolish police forces entirely, some argue for varying level of laws or reform, while some simply wish for visibility and changing minds and hearts at an individual level.

“There are changes that need to be made in every community,” Hope said.

“Maybe changes that we need to see in Benton, Kentucky, aren’t the changes needed in Brooklyn, or even Paducah for that matter.”

For the Davis family, the goal — for now — is conversations and improving community relations with law enforcement, officials and individuals.

The two are planning a series of open-air meetings, more in a conversational style than a protest-style, where people with questions can simply ask and be answered.

“We’ve had so many people reach out to us and say ‘I want to do better. I’m on your side, but I have been taught something else my whole life, so can you help me?’ ”

Dwaylon said that often generations are indoctrinated and act in true ignorance, and he hopes to extend graceful forgiveness for people whose fault is more in misinformation than in malice.

“We want to be able to educate people and just let them know it doesn’t matter what you’ve done in the past, but once you get to that point that your eyes are opened … it’s what you do moving forward that’s important.”

Hope said she knows that equality won’t be a quick achievement, and that the family might not see a marked improvement in their or their children’s lifetimes — particularly for the biracial Avi.

“She’ll have to grow up with this checklist of what to do to come home safe,” she said.

“But maybe for our grandkids it will be better, our great-grandkids. We just can’t give up.”