David Alvey crosses the finishing line under his 12 hour goal for his first full Ironman triathlon. 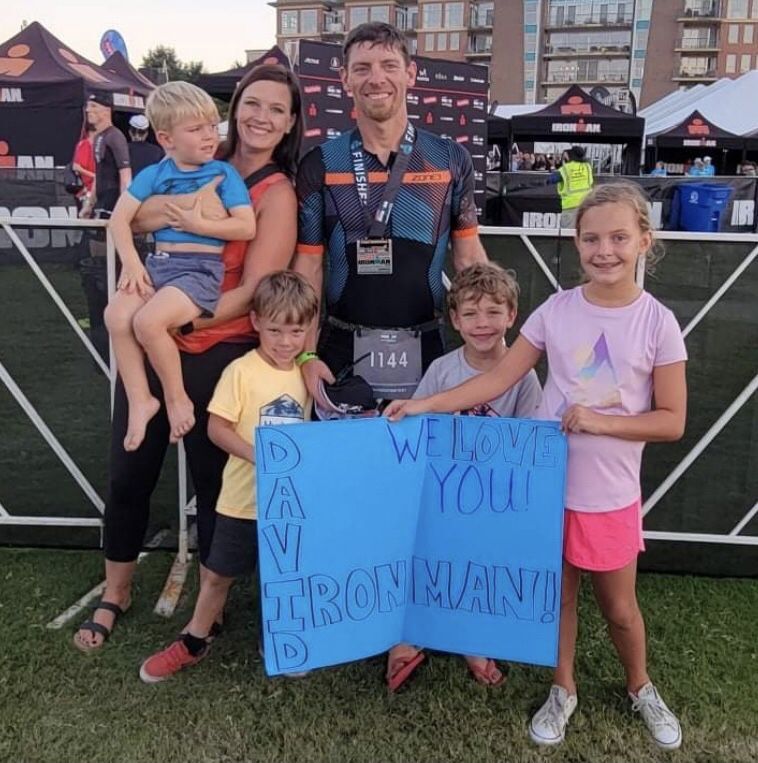 Ironman competitor David Alvey (standing, center) is shown with his family after completing an Ironman race in late September in Chattanooga. They include (from left) Holden, Savannah, twins Graham and Korben, and Anniston.

David Alvey crosses the finishing line under his 12 hour goal for his first full Ironman triathlon.

Ironman competitor David Alvey (standing, center) is shown with his family after completing an Ironman race in late September in Chattanooga. They include (from left) Holden, Savannah, twins Graham and Korben, and Anniston.

Throughout David Alvey’s athletic endeavors, he’s experienced the common stops and starts, twists and turns, and ups and downs whether they be on the soccer pitch, wooded trail or bike path. It’s all part of the process.

That took a new meaning when he was planning to run his first full Ironman triathlon last year, only to have it cancelled in the midst of the COVID-19 pandemic. That seemingly put the brakes on his Ironman plans.

But at a friend’s birthday party this past May, the question of if Alvey was going to compete in this September’s ironman race in Chattanooga was posed.

“I just didn’t want to,” he recalled. “Finally, my wife (Savannah) was like, “Yeah, you’ve done put in a year. We’ve spent all this money.’ I had a problem with guilt because I felt bad leaving her with the kids (Anniston [8], twins Graham and Korben [5], and Holden [3]). That’s a lot.”

Plus Alvey said it was training 15 hours a week — thus 15 hours away from his family — and being on call at work. Still, he decided to shoot for the race that was just over three months away.

It may have been his innate competitive spirit that also helped spur him on. Alvey, 39, played soccer for Marshall County High School but injured his knees twice before graduation and after high school. His doctor at the time told him he would have to avoid any impact on his knees, so he took up biking.

From there, he rode an average of 6,000 miles a year for eight years. During that time, he came in contact with some triathletes in the area who introduced him to the sport that involves biking, running and swimming. But it wasn’t immediate.

“They were like, ‘Hey, we’re similar in biking power’ and that’s not always common to find. I said, ‘You’re not getting me into the triathlon stuff. I’m a biker. I don’t like to swim. I don’t like the water, and I don’t run because my knees are toast.’

“Three years later and here I am.”

Like the old adage goes, it’s not the destination but the journey. Entering the triathlete’s world, Alvey had to get back to running and oddly enough his knees didn’t bother him. He was running half marathons and even at one race saw his orthopedist standing at the finish line and was shaking his head when Alvey passed.

Swimming was another issue. Though Alvey is a scuba diver, he admitted he’s not an enthusiastic swimmer. In fact, practicing in a pool, he said he would get halfway across the pool and “would freak out and have to stand up.”

“Face in the water? Can’t do that,” Alvey said. “So the thought of freestyle swimming … (but) I self-taught myself to swim.”

“We’re going from the bottom to the top all within one year,” Alvey said. “I was running into people saying how many half(Ironman)s did I do and I’d say none. I went from spring to Ironman and they were like, ‘Oh my gosh!’ ”

Alvey did three races and then ended up having knee surgery prior to preparing for Louisville. But as the pandemic spread, he got the word a month before that his Ironman was cancelled. It may not have been a complete setback, but it did cause him to pause and reassess things.

“I’ve got four little kids, my wife is working on her masters, we can not do another year of training,” he said. “It’s too much.”

The destination and the journey

Having the green light to pursue his Ironman goal, he put himself all in when this past May rolled around and got back to more running, biking from his Calvert City home to Murray and back, and even put in 56 miles of swimming at Calvert City Country Club’s pool in the early morning hours.

He said most people would train for at least 10 months for an Ironman and not three months. The process involved not only the physical workout demands but mental and simple preparedness of how to factor his hydration and nutrition during the new kind of race.

“It’s not for everybody,” Alvey said. “When I first thought about it, I was like, “Oh my gosh! I can’t imagine doing that,” then I was like, ‘You know what? I think I can!’ And even after I did it, I finished so perfect to what I planned, that people were already talking that you could have shaved more time off. But the whole time in my head I thought, ‘You’ve never ran a marathon before so don’t go too hard on the bike because you might not make it.’ ”

His future plans are to compete in more half-Ironman races that won’t take up so much time for training. And he also has a knee replacement planned after finishing his inaugural Ironman running bone-on-bone.

But even with his Ironman goal completed, his race recap was more a thank you to his family and friends who helped him cross the finish line … and then shared how he placed.

“Mine was not about my race; it’s about the people who supported me, so I wrote all these thank you’s to everybody and I had this little bitty paragraph at the end of here’s my race,” he said. “It’s not what I did, it’s how I got there.”