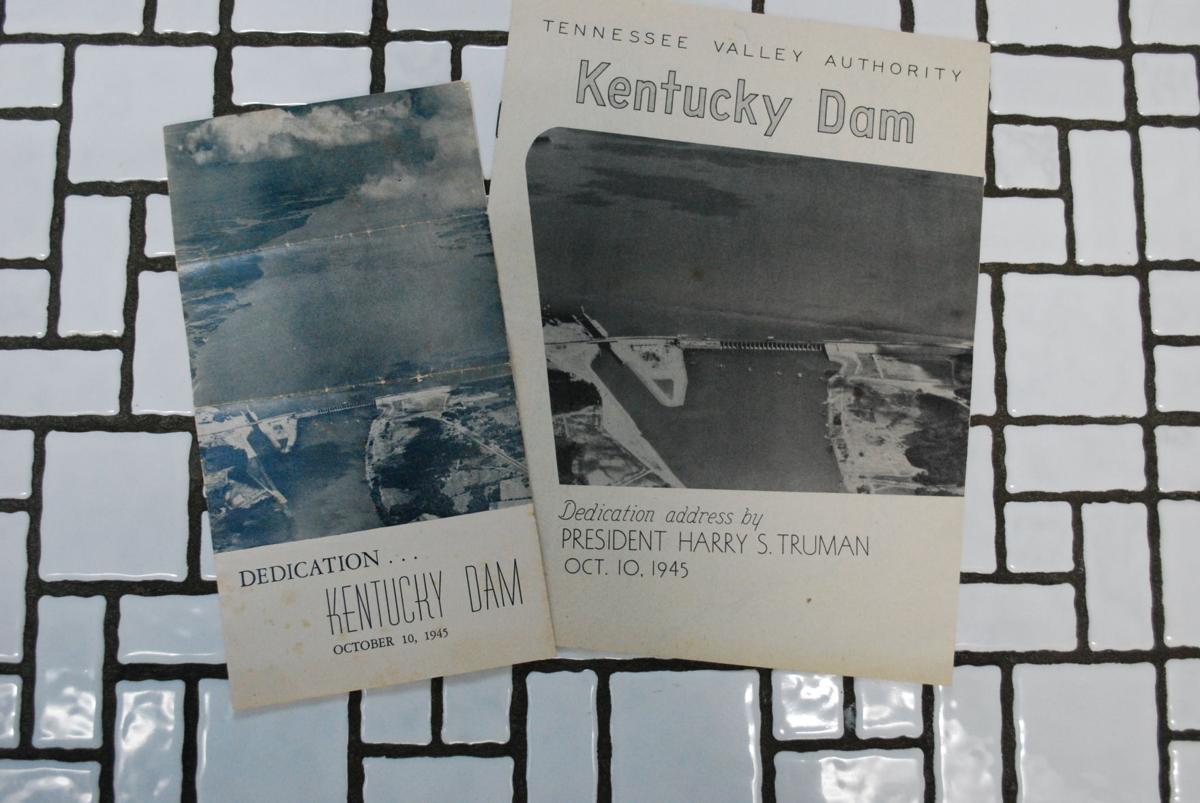 On the left is an original program of the Oct. 10, 1945, dedication of Kentucky Dam. On the right is an original souvenir brochure containing President Harry S. Truman’s dedication address. Both souvenirs were given to the writer of this article at the dedication, which she attended as an 11 years old Calvert City resident. 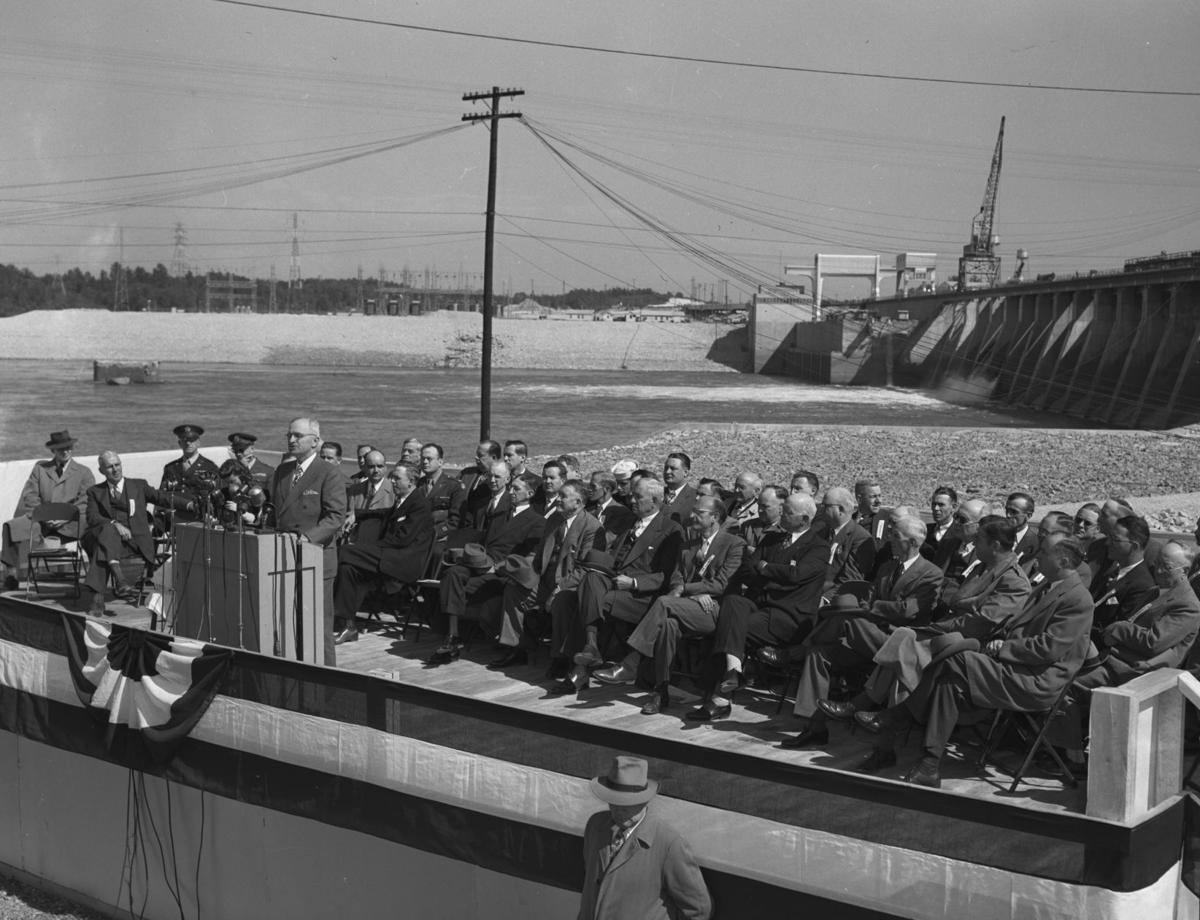 U.S. President Harry S. Truman is shown standing at the podium and dedicating Kentucky Dam 75 years ago on Oct. 10, 1945. 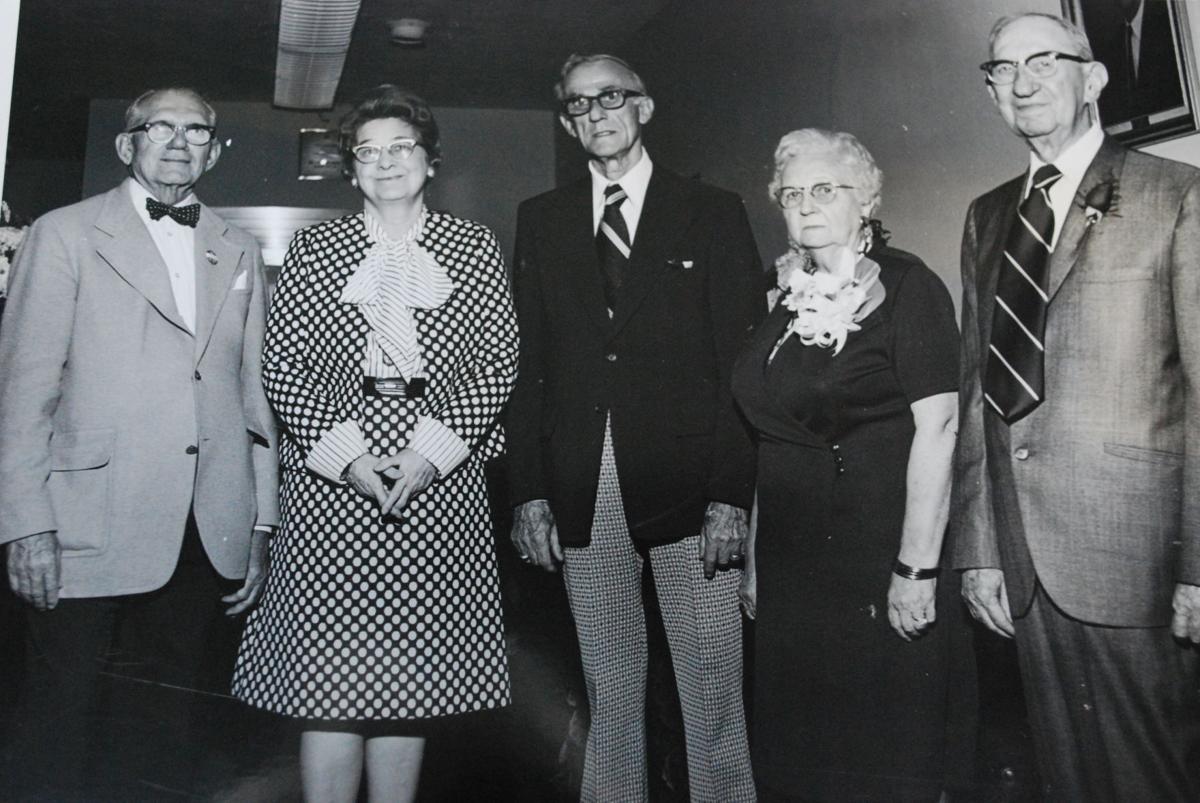 Lower Tennessee Valley Association leaders attended a 1973 gathering in Calvert City. They were the only members still living at that time. Pictured, from left, are Hecht Lackey, Millie Hortin, wife of L.J. Hortin, L.J. Hortin, Dora Draffen, wife of Luther Draffen and Luther Draffen. The men and their wives reminisced about issues they faced in lobbying for construction of Kentucky Dam.

On the left is an original program of the Oct. 10, 1945, dedication of Kentucky Dam. On the right is an original souvenir brochure containing President Harry S. Truman’s dedication address. Both souvenirs were given to the writer of this article at the dedication, which she attended as an 11 years old Calvert City resident.

U.S. President Harry S. Truman is shown standing at the podium and dedicating Kentucky Dam 75 years ago on Oct. 10, 1945.

Lower Tennessee Valley Association leaders attended a 1973 gathering in Calvert City. They were the only members still living at that time. Pictured, from left, are Hecht Lackey, Millie Hortin, wife of L.J. Hortin, L.J. Hortin, Dora Draffen, wife of Luther Draffen and Luther Draffen. The men and their wives reminisced about issues they faced in lobbying for construction of Kentucky Dam.

It was October 10, 1945. The weather was sunny and warm. President Harry S. Truman was dedicating Kentucky Dam from a platform below that powerful engineering achievement.

The dam had been producing electricity for 13 months. The crowd was estimated at 20,000, and it was the only time a sitting president has visited Marshall County.

Saturday will mark the 75th anniversary of that dedication. It will pass with little fanfare. Yet it is impossible to understand the impact Kentucky Dam has had on western Kentucky unless you have experienced it.

Kentucky Dam literally pushed Marshall County and environs out of poverty. It was the brainchild of Calvert City businessman Luther Draffen and U.S. Sen. Alben Barkley of Paducah. Barkley later became vice president of the United States. Their unwavering work to have the dam built and located here is unmatched.

For those born after 1945, Kentucky Dam, Kentucky Lake and Kentucky Dam State Resort Park have just been here for their enjoyment. However, there’s a powerful — at times poignant — backstory of how they became reality.

At a 1975 dinner, the late Murray State University Professor L.J. Hortin painted a vivid picture of Luther Draffen as the driving force behind Kentucky Dam: “In 1936, we met in an old plumb thicket overlooking the Tennessee River and there was poverty all around us,” Hortin said. “If anybody had predicted we’d be in this beautiful Calvert City Country Club now, I wouldn’t have believed it.”

During the plumb thicket meeting, Tennessee Valley Authority engineers and Draffen drew plans of the dam in the dirt with a pointed stick for Senator Barkley and a bevy of congressmen.

Before the dam, Marshall County was a poor farming community. Thousands were leaving to work in factories in Detroit and Flint, Michigan and chemical industries or steel mills in Akron and Cleveland, Ohio. Electric power didn’t exist here. There were no electric lights, electric refrigerators or kitchen ranges, running water or indoor plumbing. Farm families lit their homes with kerosene lamps. In winter, families heated their homes with wood-burning fireplaces or potbellied coal stoves. Neither television nor the internet existed though some families had battery-powered radios.

In 1933 Congress passed the Tennessee Valley Authority Act, the New Deal federal agency that built a series of 16 dams including Kentucky Dam. Kentucky Dam had three objectives — enhanced navigation, flood control, and hydroelectric power production. After operations at the dam began, it took another five years before rural electric cooperatives, created under the Rural Electrification Act of 1936, extended electric power to farm communities.

The history of economic development in the lower Tennessee River Valley and construction of Kentucky between July 1, 1938 and Aug. 30, 1944 is a long series of events going back to the Civil War. Without Draffen’s vision, financial investment, time and political prowess the dam might never have been built at the Gilbertsville townsite. Though he didn’t do it alone, he was the driving force.

Draffen solicited and received help from a litany of heavy hitters of his era. Besides Barkley, there was Hortin, Paducah broadcaster Hecht Lackey, Congressmen Voris Gregory and Noble Gregory of Mayfield, Senators Kenneth McKellar of Tennessee and George Norris of Nebraska. Draffen also led the powerful Lower Tennessee Valley Association, made up of about 40 business leaders from western Kentucky, northwest Tennessee, southeast Missouri and southern Illinois. LTVA’s single goal was to “bring prosperity to this region,” known as “the Valley.” Electrification was crucial if the Valley’s people were to prosper.

Draffen wasn’t the first person to envision damming the lower Tennessee River. Efforts to tame the river, especially for navigation and flood control, began as early as 1864. What Draffen understood was that electrifying “the Valley” was the only way to alleviate poverty. Building a hydroelectric power dam would achieve that goal. In 1928, Draffen made 48 trips to Louisville at his own expense to lobby Kentucky Utilities to provide electricity here. KU provided electricity to Paducah, but refused to extend its lines into rural communities saying, “there wasn’t sufficient need.”

Groundwork that eventually prompted Kentucky Dam’s construction started June 5, 1920 when Congress authorized the U.S. Army Corps of Engineers to conduct a 10-year survey of the Tennessee River Valley. It was the most comprehensive study ever made of any river basin in the United States. In 1928, the Corps recommended a flood control, navigation and power dam at Aurora Landing in Marshall County. The recommendation prompted formation of Aurora Dam Clubs in Marshall, Calloway and Graves counties.

The project went to Congress on March 24, 1930, and on May 28, 1931, Southern Utilities Inc. was granted a temporary permit to build the dam. But on May 18, 1933, President Franklin Roosevelt created TVA. That changed the picture. TVA opposed Southern’s plan, and the company’s permit was allowed to expire. Aurora Dam Clubs morphed into the LTVA with Warren Swann of Murray as president, Draffen, vice president and Hortin as secretary. In 1935, Congress authorized TVA to build dams for a nine-foot channel from Paducah to Knoxville, Tennessee. ‘It was key legislation,” Draffen said in a 1973 interview. “Without that, there was doubt TVA would ever build a dam on the lower Tennessee River.”

In March 1936, TVA rejected Aurora Landing and recommended Gilbertsville as the preferred site. Then began what Hortin called “the most frustrating, most difficult problem of the entire effort.” TVA kept stalling and opposition from private interests arose. “TVA had moved in but wasn’t ready to build the dam,” Hortin said. “All the while the nation’s economic condition pressed hard on the people. There was hunger, people couldn’t get work, and the outlook was grim. TVA would say, ‘Someday we’ll build it.’ We wanted them to get it started. TVA was being called socialism, and a lot of unprintable things. But LTVA stayed out of that type rhetoric and petty politics. Our argument was pretty mercenary. We contended that TVA was building dams for other states, it was federal tax money being spent, and here we were at the heart of all this water, and our dam wasn’t being built!”

In January 1937, fate took a hand as nature demonstrated the need for a dam. Rain fell for 19 days. The Tennessee and Ohio rivers and their tributaries overflowed their banks. Multimillions of dollars were lost.

A crucial piece of legislation passed Congress on Feb. 16, 1938. Hortin received a telegram from Sen. Barkley reading: “Just retained, Gilbertsville, whole TVA appropriation.” That bill meant TVA’s appropriation wouldn’t be cut. Still TVA wouldn’t use the word, construction. Draffen was on a train bound for Washington to lobby for the bill when he received the news. He continued his journey and thanked each legislator who voted for it.

LTVA’s lobbying bore fruit on July 1, 1938 when Congress appropriated $2.613 million for construction of the dam. Its total cost was $116.2 million. “On that day the word construction was used for the first time,” Hortin said. “It was key; we had our dam!”

At the height of construction, 5,000 men from several states came to work on the dam. The economy boomed, and housing was needed for the influx of workers. TVA floated homes down the river to Gilbertsville from its worker village at Pickwick Dam and built a self-contained community with schools, administration offices, medical clinic and recreational facilities. That community, just south of old Gilbertsville, became known as “The Village.”

After the dam was completed, Draffen recruited Charles Hall to assist him in efforts to entice industry to locate in Calvert City. Hall wrote more than 1,000 letters touting the amenities Calvert City offered — cheap electricity, river, rail and highway transportation. Draffen and Hall reaped success in 1948 when the Pennsylvania Salt Manufacturing Company (now Arkema) announced it would build a plant near Altona. It opened in July 1949. Pittsburgh Metallurgical Company (now Calvert City Metals & Alloys) opened in November 1949. Industrialization had begun.

Predictions that Calvert City’s population would balloon from less than 300 to 10,000 by 1960 didn’t happen. However, industrialization continued with National Carbide of Air Reduction (now Carbide Industries) opening in January 1953, followed by BFGoodrich Chemical Company (now Lubrizol) and West Lake Chemicals. American Aniline and Extract Company (now Estron) opened in 1954; Airco Chemical Company (which later became Air Products and Chemicals and is now Evonik), and General Aniline and Film Corporation (now Ashland) opened in 1956. Other spin off companies include Wacker, Cymetech and many support businesses.

A few industries Draffen and Hall courted didn’t locate at Calvert City. Hall said General Tire, now closed, opted for Mayfield. Then there was Great Lakes Carbon Corporation owned by George Skakel, father of Ethel Kennedy. In a 1980 interview, the late Grand Rivers Mayor John Henry O’Bryan, said Luther Draffen brought Skakel to Grand Rivers to buy land for a plant. Great Lakes Carbon bought more than 1,200 acres a little northeast of Grand Rivers from TVA and three private landowners. But in a letter to Hall dated April 3, 1952, Skakel said he regretted “the company had reluctantly decided to abandon its development plans.” Skakel held out hope that Great Lakes Carbon might build the plant later. But on Oct. 3, 1955, Skakel and his wife, Ann, were killed when their plane crashed.

Probably the most significant impact electricity from Kentucky Dam made on Marshall County was a higher standard of living for its people. In 2015, earnings in all industries averaged nearly $55,000 annually. Last year, travel and recreation — much of it related to Kentucky Lake created by the dam — added $74 million to the county’s economy and Calvert City added 2.994 million in payroll taxes to county coffers.