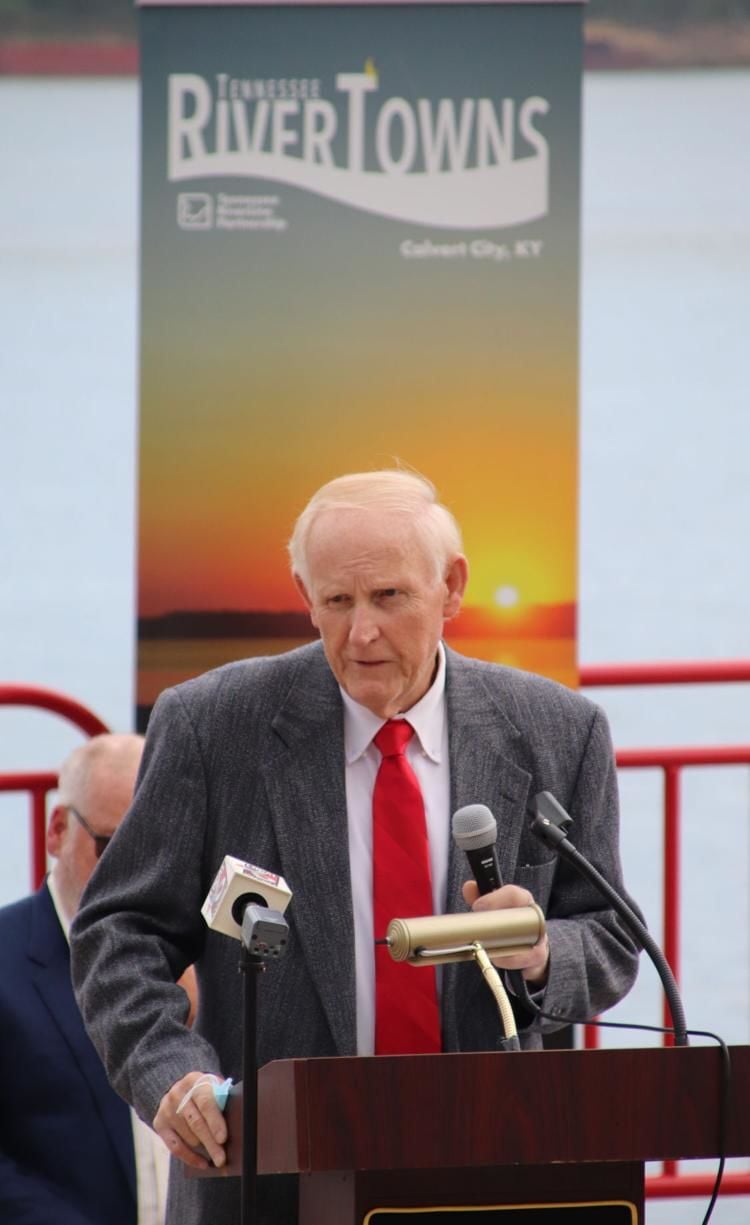 Calvert City Mayor Lynn Jones addresses a crowd gathered in late October on the Paducah riverfront for the announcement of Calvert City and Paducah and McCracken County being listed as Tennessee River communities selected for the Tennessee RiverTowns Program. 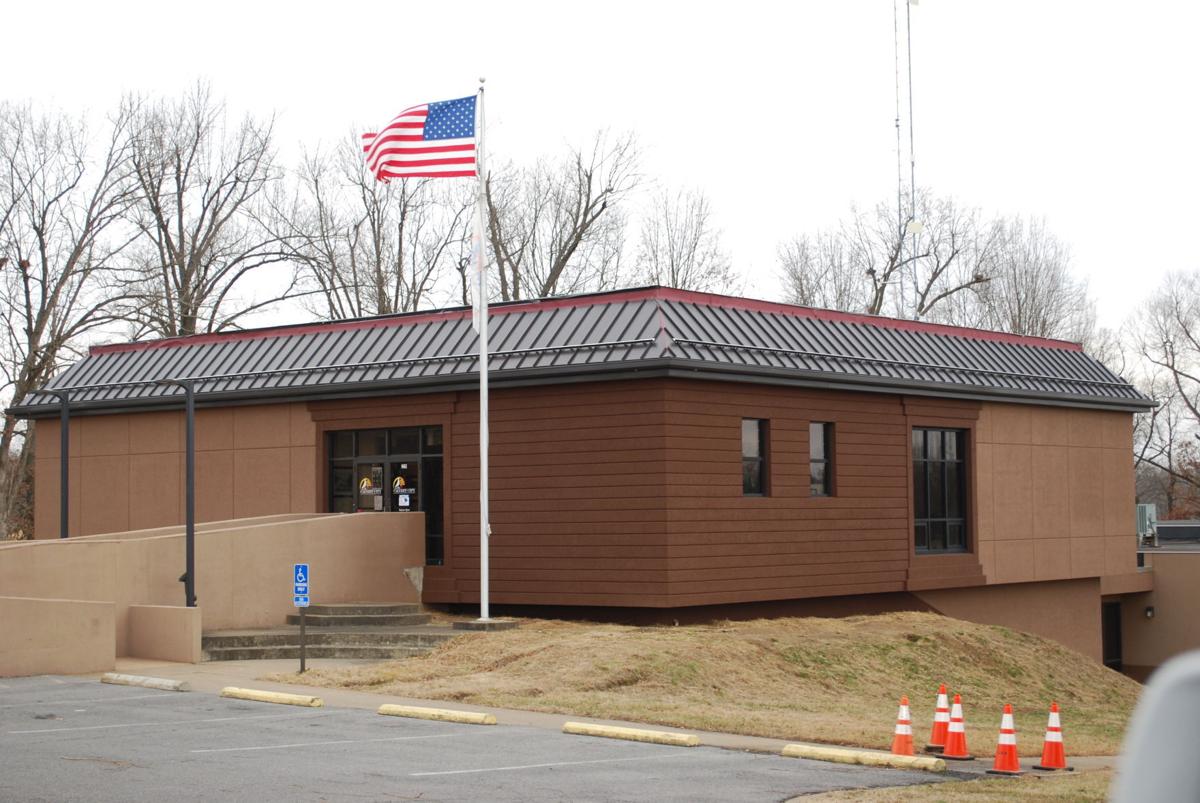 The exterior facelift of City Hall in Calvert City is 99% finished. One remaining change is the relocation of the ramp jutting out from the front door. The 1979-designed ramp to comply with the Americans with Disabilities Act will be removed and relocated to one side of the building, Mayor Lynn Jones said.

Calvert City Mayor Lynn Jones addresses a crowd gathered in late October on the Paducah riverfront for the announcement of Calvert City and Paducah and McCracken County being listed as Tennessee River communities selected for the Tennessee RiverTowns Program.

The exterior facelift of City Hall in Calvert City is 99% finished. One remaining change is the relocation of the ramp jutting out from the front door. The 1979-designed ramp to comply with the Americans with Disabilities Act will be removed and relocated to one side of the building, Mayor Lynn Jones said.

Despite limitations created by the COVID 19 pandemic in 2020, Calvert City moved forward with major projects. Mayor Lynn Jones cited the purchase of two tracts totaling about 11 acres that will allow the city to implement mitigation at flash flood-prone sites. And the city completed a total interior and exterior renovation of the Civic Center plus an exterior facelift of City Hall is 99% finished.

Both projects are the first major revamps the structures have undergone since they were built — the Civic Center in the early 1960s and City Hall in 1979. Approximate costs of those renovations were about $180,000 and $360,000 for the two structures respectively. Jones emphasized that using city employee labor to refurbish the Civic Center cut that cost by a third.

“And what we can be sure of is the quality and workmanship is superior,” he added.

The Civic Center has two meeting rooms — one with the capacity to accommodate several hundred and the other, smaller groups. Jones plans to name the large room the Luther Draffen Room, in memory of the Calvert City merchant whose leadership, financial support and lobbying in the 1920s and ’30s resulted in construction of Kentucky Dam between 1938 and 1944 at Gilbertsville. When he died in 1979, Luther Draffen was called “the father of Kentucky Dam.” He also emceed the dam’s dedication ceremony Oct. 10, 1945.

Jones wants to name the smaller room for native son Charles Hall, who in the 1940s, became Draffen’s assistant in lobbying industries to locate at Calvert City and take advantage of cheap electricity produced by the dam.

At least one project suffered delays last year directly attributable to the pandemic. “I think the most frustrating thing that we didn’t get accomplished in 2020, was the walking/biking trail from the end of Fifth Avenue to McDonalds (off U.S. 62),” Jones said. “The pandemic played a role in that because government employees, working from home, are not as efficient as in the office setting.”

Jones predicted the trail, started in 2018, will be completed by mid-summer.

Despite coronavirus delays, the state project to redesign and beautify U.S. 62 from Interstate 24, Exit 27 to Kentucky Dam State Resort Park and a walking trail beside it, was completed last year. “The work that Gov. (Steve) Beshear assigned to the improvement of highway 62 and the walking trail from McDonalds to the state park looks so good,” Jones said. The trail, from the end of Fifth Avenue to McDonalds, when completed, will connect to the U.S. 62 trail to the state park. The state park, including the airport, was annexed by the city in 2014.

“We were able to capture (the airport) to the city as a gift — a lease from the Commonwealth,” Jones said, noting restoration of its certification and physical upgrades were made last year. “We were able to complete the decorative fencing in the front; we were able to install the fuel tanks, and we will be selling fuel by the end of January. We were also able to secure the contracts to build two T-hangars and to get a complete overlay of the runway. “

“All of those airport projects cost somewhere in the area of $3 million in grant monies that came to us as partners with the state of Kentucky,” Jones said. “We are sharing the cost of the T-hangars. The state is going to pay for the concrete and asphalt and we are going to build the buildings. So we are excited about the ongoing opportunity to build a T-hangar for a fixed-base operator. That will come either late this year or early next year. We also redid the front parking area, curbs, gutters and asphalt in that area as well. That whole thing is really taking shape and it’s going to look good.” The mayor called the airport reclamation a “a highlight” of 2020. This year, the city has applied for a grant to install a fence around the airport’s perimeter to keep deer off the runway.

“There was talk back in the ‘90s about having pools in which we could focus water, maintain it, and slow the flooding — minimize flooding in some areas and release it completely in others,” Jones said. Because the culvert under the railroad is too small, that area has become the choke point prompting flash flooding, and Jones hopes the railroad can be persuaded to replace the culvert with a larger one.

The mayor also envisions starting discussions regarding a 10-year plan to install sidewalks on streets between Cedar and Evergreen. He foresees widening those streets to three lanes with parking on the side next to the sidewalks. Eventually he wants to see Old Calvert rebuilt and made more attractive. He said the street/sidewalk project could be financed by grants and/or a 10-year tax levy.

This year, the city wants to extend and connect the city’s walking/biking trail with those at the state park and across the dam to connect with Grand Rivers trails. The two cities are coordinating to eventually cross the canal bridge between Kentucky Lake and Lake Barkley and connect with trails in Land Between the Lakes, then connect with Cadiz trails, which are moving this way. The connected trails would stretch 71 miles — one of the longest trail systems in the nation. Connecting the U.S. 62 trail with the state park trail will involve building an underpass to reach the east side of U.S. 641 at the park.

Besides those projects, Jones said his administration will “push forward on construction of a new theater” at the old Gilbertsville school site. The mayor wants to partner with Murray State University to operate the theater. “We want Murray State to run that theater with (public radio station) WKMS being a help to them,” Jones said, adding he has already talked with the university. He also wants to involve the Badgett Theater at Grand Rivers and Clay Campbell, owner of Kentucky Opry at Draffenville. Theater construction is targeted for completion in 2022.

Jones said with the network of cultural outlets, tourists could stay at the state park and attend entertainment at each theater. In so doing, “we can change the image of the state park to culture, not fishing. We’ll make it a regional approach — that’s our goal.”

Within two years, the city plans to relocate its water plant out of the floodplain on Ky. 282. Engineering work on a new $10 million water plant is ongoing. “It will be ’22 before construction will begin on that,” Jones said. “It will take that long to get the necessary permits. By the end of ’23, it can be up and going.” The new plant will have the capacity to remove calcium preventing clogged faucets, and water heaters will last 20 years. “We’ll change the impact of that high calcium water, plus the plants can use it for their processes,” Jones said. “They can’t use high calcium water.”

Concluding its to-do list for this year, the city plans to start rehabilitation of the old bank building on Aspen Street. The building housed the city’s only bank from 1910 to 1954. With a donation of $15,000 from Calvert Area Development Association, the city added $5,000 and bought the building in 2018. “This year we’re going to take off the metal that was added to that building, redo the front façade, and we’re going to tuck point the brick and paint them,” Jones said. “We’re also going to start looking at how to redo the inside. The cost of renovating the whole building and redoing the inside so it has usefulness and purpose will probably cost $275,000 to $200,000.”