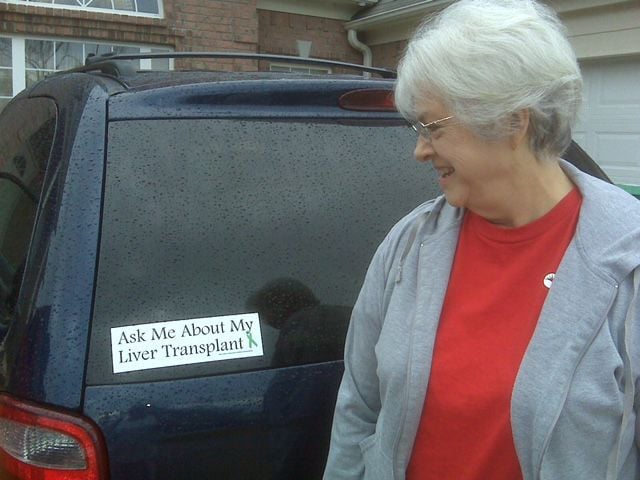 Esther Ford has a new bumper sticker one month after her liver transplant in 2010. 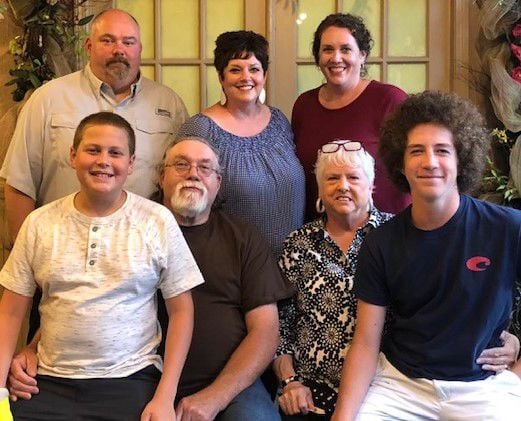 Esther Ford (first row, second from right) poses with her family at her husband Ronnie’s 70th birthday celebration in 2018. In the front row are Ford and Ronnie with grandsons Quintin and Cooper Rodriguez. On the back row is Ford’s daughters, Crystal Rodriguez (right) and Crystal Williams with husband John.

Esther Ford has a new bumper sticker one month after her liver transplant in 2010.

Esther Ford (first row, second from right) poses with her family at her husband Ronnie’s 70th birthday celebration in 2018. In the front row are Ford and Ronnie with grandsons Quintin and Cooper Rodriguez. On the back row is Ford’s daughters, Crystal Rodriguez (right) and Crystal Williams with husband John.

For four years, Esther Ford went day after day of being weak and tired, so weak she could not even hold a book up to read. Routine blood work for her diabetes showed nothing out of the norm.

Finally at the beginning of the fifth year in 2005, Dr. Glen Van Loon and Dr. Ruben Cuadrado found an answer to her medical condition. Ford’s liver enzyme levels were elevated meaning there could be damage or inflammation of the liver causing liver disease.

The liver is a large, half moon-shaped organ located in the right, upper quadrant of the abdomen, below the diaphragm. It is responsible for many metabolic processes in the body. She was immediately placed on the transplant list at a Memphis, Tennessee hospital, where one of her daughters lives.

“They were very instrumental in saving my life,” Ford said, referring to Van Loon and Cuadrado.

Soon she began having hives caused by ammonia when her body didn’t expel it correctly and it went to her brain. This caused her to start passing out frequently.

“I continued to feel bad. I started getting jaundice. My eyes were yellow, and I just apparently looked awful because people told me afterwords they couldn’t believe how bad I looked,” Ford said.

As her enzymes continued to rise, her Model for End-Stage Liver Disease (MELD) score remained around a 12. The MELD number is a scoring system from 6-40, ranking the level of sickness to determine who may receive a liver transplant. To receive a transplant, a person’s MELD score must be 18 or higher.

In October 2010, Fords level had risen to 18, but with no liver available. “I just kept getting worse. I kept passing out more and more. And just not functioning. I didn’t do anything. I just laid all day long because I was so weak and couldn’t function,” she said.

While sitting at the hospital in Memphis, her doctors told her there was nothing else they could do for her. ““You’ve taken all the medicine that we know of for this, and you have to have a new liver,” they said.

That was a Tuesday.

“We came home from Memphis, and everyone was just like what’s going to happen now. And I had the faith all along. I never really got excited. I just felt like I had a friend that told me in January ‘Don’t worry about this because I’ve already talked to God, and it’s going to be okay.’ And I said, ‘Oh, really.’ She said, ‘I told him that we still believe in miracles and when he got ready, you would be ready,’ ” Ford said.

The next night, Ford’s bible study group at Pleasant Grove United Methodist Church held special prayers. At 9 p.m. that evening, she received a call from New York saying a match for her liver had been found.

The family drove Memphis late Wednesday night and Ford’s transplant was completed on Thursday, 10 months after being placed on the list. “Which is phenomenal in itself because, I mean, usually it’s two to three years, and sometimes never. It’s pretty high, the number of people that die before they get a liver,” she said.

After her surgery, Ford stayed with her daughter, Heather Rodriguez, in Memphis for several weeks while recovering. She was moving around after six weeks, with the exception of lifting things. “It was amazing the healing that I had. This whole thing has been a God thing,” said Ford.

Her levels are checked every three months by Van Loon when checking her blood work for her diabetes. “He does a very good job, and like I said I give him and Dr. Caudrado major credit for saving my life because they got me to the point that I could exist, and then helped finished it out.”

According to organdonor.gov, there 109,000 people in the United States currently on an organ transplant list. Every nine minutes, another person is added to a waiting list and an average of three people out of 100 dies in a way that their organs can be donated. Seventeen people die each day while waiting for a transplant. One person could potentially donate up to eight life-saving organs, the website states.

““It’s such a minor thing. People may not consider it minor but it is, when you die you don’t need those organs, and if yours are good enough then think about how many people could benefit, I mean even if it was just one organ, but if you gave several, think about how many you would save,” Ford said.

On the one year anniversary of the transplant, Ford reached out to the donor’s family through the hospital, but they did not want to correspond. “I would love to know, but I understand their side too because if they gave five organs and four of us died, then they’ve lost that person twice, or actually four times. So I see their side, but I really do wish I could know who it is from,” she said.

The family holds a celebration each year in October, complete with a “Happy Birthday Flo” cake. “Flo” is what the family has affectionately named Ford’s liver. Flo even has a special presence on the family’s tree at Christmas that holds heart ornaments over every family member with their name, date of birth and date of death if they have passed away. “My son-in-law made me a little bitty liver, and it’s been attached to my heart so every year when I put my heart on the tree, it has little liver on it,” said Ford.

In June 2019, Ford and her husband, Ronnie, celebrated their 50th wedding anniversary, something she would have never done without the transplant.