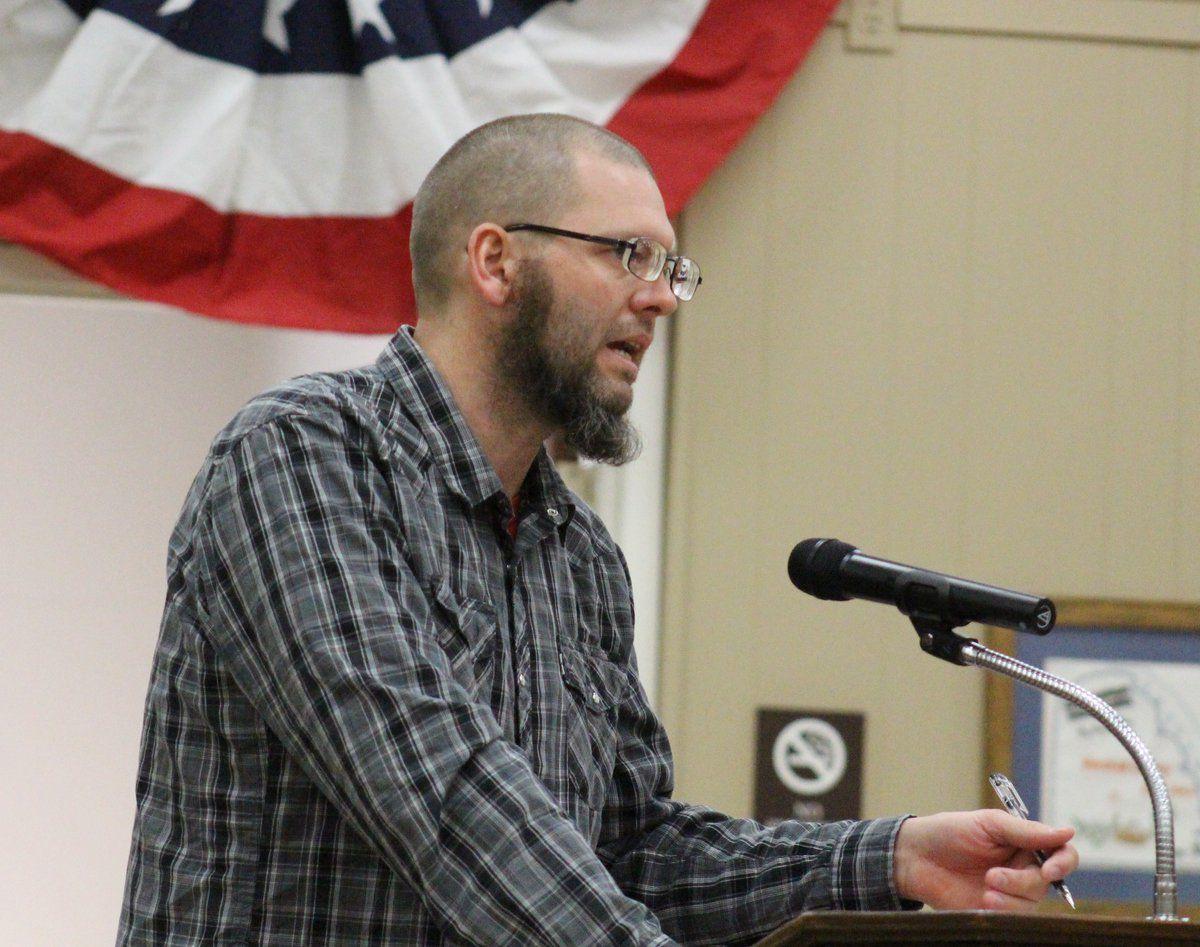 Michael Scott Conkright, 41, of Benton, was formally banished from Marshall County's parks for the next three years by the Marshall County Fiscal Court following a public hearing on Jan. 7. The banishment stems from his alleged actions in causing a number of ongoing issues at the park which have resulted in additional costs to the park, as well as his alleged aggressive behavior toward park employees. 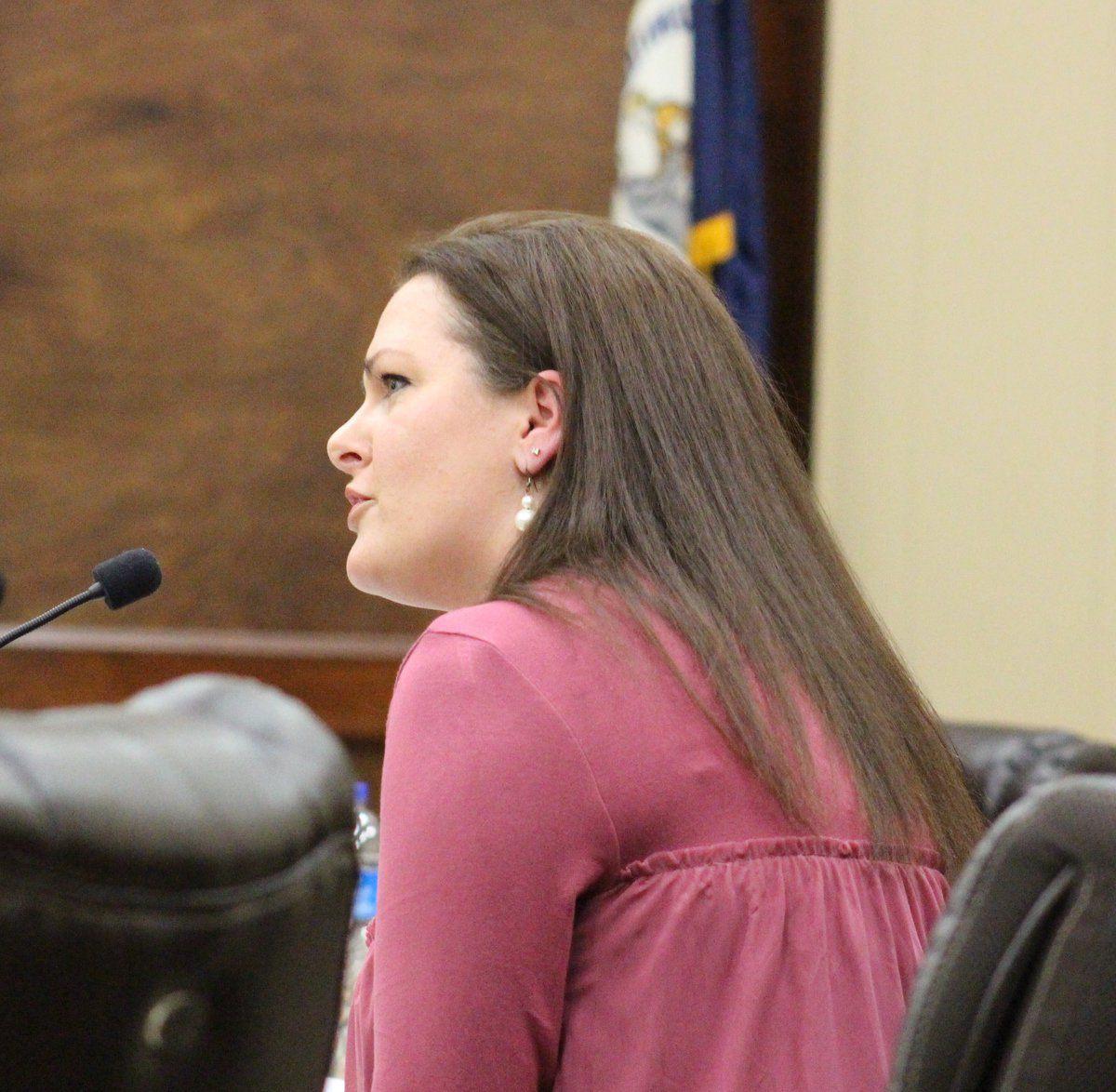 Marshall County Parks Director Britney Heath answers a litany of questions asked by Michael Scott Conkright during the public hearing with the Marshall County Fiscal Court, held Jan. 7 at the county courthouse in Benton. The fiscal court members unanimously voted to banish Conkright from all county parks for three years from that date.

Michael Scott Conkright, 41, of Benton, was formally banished from Marshall County's parks for the next three years by the Marshall County Fiscal Court following a public hearing on Jan. 7. The banishment stems from his alleged actions in causing a number of ongoing issues at the park which have resulted in additional costs to the park, as well as his alleged aggressive behavior toward park employees.

Marshall County Parks Director Britney Heath answers a litany of questions asked by Michael Scott Conkright during the public hearing with the Marshall County Fiscal Court, held Jan. 7 at the county courthouse in Benton. The fiscal court members unanimously voted to banish Conkright from all county parks for three years from that date.

After hearing statements and evidence regarding several months of issues for which Michael Scott Conkright is also facing a criminal charge, the Marshall County Fiscal Court officially banned him from all county parks until Jan. 7, 2023. The details of Conkright's alleged actions, including aggressive behavior toward park staff, were detailed during a public hearing on Jan. 7 and include unauthorized use of field lights and water functions.

According to the criminal complaint filed by Detective Captain Matt Hilbrecht with the Marshall County Sheriff's Office and testimony given by Hilbrecht, MCSO Chief Deputy Tim Reynolds and Marshall County Parks Director Britney Heath the ongoing troubles with Conkright began around April 2019 at the Mike Miller Park in Draffenville. He would allegedly turn on both the soccer and baseball field lights in an attempt to partially light the wooded walking/running trail; the park staff would notice the lights on but the fields not in use and turn them back off. Park staff reportedly asked him multiple times not to turn on the lights when the fields weren't in use but he refused to comply, so they placed locks on the electrical boxes which contained the light switches.

Heath said the park also enacted a new rule that closed the wooded walking/running trail at dark due to a public safety concern, caused by the lack of proper lighting. She said signage was placed at multiple entry points and the policy change was announced publicly via the park's social media page. However, Conkright reportedly began using a headlamp and continued to use the trails after dark -- even after the park had closed -- which caused park employees to have to work late while they attempted to remove him from the property.

Heath and Hilbrecht said Conkright can be seen in video surveillance footage running the wooded trails in the evenings, marked by the flashing headlamp he routinely wears.

In August 2019, Mike Miller Park employees reportedly began noticing the waterfall feature at the lake operating after park employees had shut it off. According to police documents and testimony, when park employees asked Conkright if he had been turning it on, he admitted to doing so and insisted "it was his right as a taxpayer," that he enjoyed the aesthetics of the waterfall while he jogged the trails, and that the waterfall produced "the best-tasting water in the county."

Heath said the waterfall at the lake serves two specific functions: to increase the water level when it gets low, and to churn the water if it sits stagnant for too long. It's not a feature designed to continuously run, she noted.

Because Conkright continued to turn on the waterfall without authorization, the park staff had to place a lock on that switch as well.

Then in October 2019, Mike Miller Park staff arrived for a morning shift and discovered the entrance at U.S. 68 was flooded where a water spigot near the fence post had been turned on and then left running overnight. In November, Conkright was reportedly seen by a park staff member turning on a water spigot near one of the pavilions and upon realizing he was seen, turned off the water and his headlamp before fleeing into the woods.

According to police documents, Conkright was confirmed as being in the park on both evenings. In addition, Reynolds, while off duty and attending a function at the park with his family, reportedly observed Conkright with the water spigot in operation near the entrance of the park.

Also according to police documents, Hilbrecht and Reynolds conducted a recorded interview at Conkright's home in the subdivision that abuts the Mike Miller Park and he "readily admitted" to turning on the water spigots to get fresh drinking water; he also allegedly told them he lets the water run to help eliminate the chlorine taste for when he's finished with his run and ready for a drink.

Conkright further asserted to police the park staff was harassing and discriminating against him by depriving him of access to the waterfall and locking the light switches. He also reportedly asserted the water running all night was less expensive than the ball players who accidentally left the field lights running all night -- and "that it is not his responsibility to turn the water off," rather the responsibility of the employees to check all bathrooms and water spigots before leaving the park.

Hilbrecht reported he attempted to get Conkright to agree to cease from turning on the water and allowing it to run after he had filled his water bottle, but Conkright would not agree.

Heath said her staff became uncomfortable working at night because they knew that's when Conkright frequented the park and he was routinely aggressive with any staff who approached him, turning his headlamp into their eyes to temporarily blind them and forcing his phone into their faces, saying he was filming them. She said he "was very confrontational" and "they felt threatened by his demeanor."

Conkright produced several email exchanges between he and Heath in which the two discussed park rules and policies which he said he believed were conflicting -- giving him permission to use certain features and then taking those rights away. He expressed his belief that Heath changed the rules in attempt to stop him from using the trails and the park lights and that her staff harassed him. He also confirmed his belief that the park system is for public use and because he's a member of the public and a taxpayer, he should have access to utilize whatever he wants.

After a brief executive session, Marshall County Judge-Executive Kevin Neal read a brief statement issuing the decision of the fiscal court members, which banished Conkright from all county parks for three years, effective immediately. The fiscal court members voted unanimously in favor of the measure.

Conkright is scheduled to appear in Marshall District Court next week for a pretrial conference regarding the charge of criminal mischief 3rd degree, a Class B misdemeanor.

He is represented by public defender Bethany Willcutt. He has pleaded not guilty to the charge.