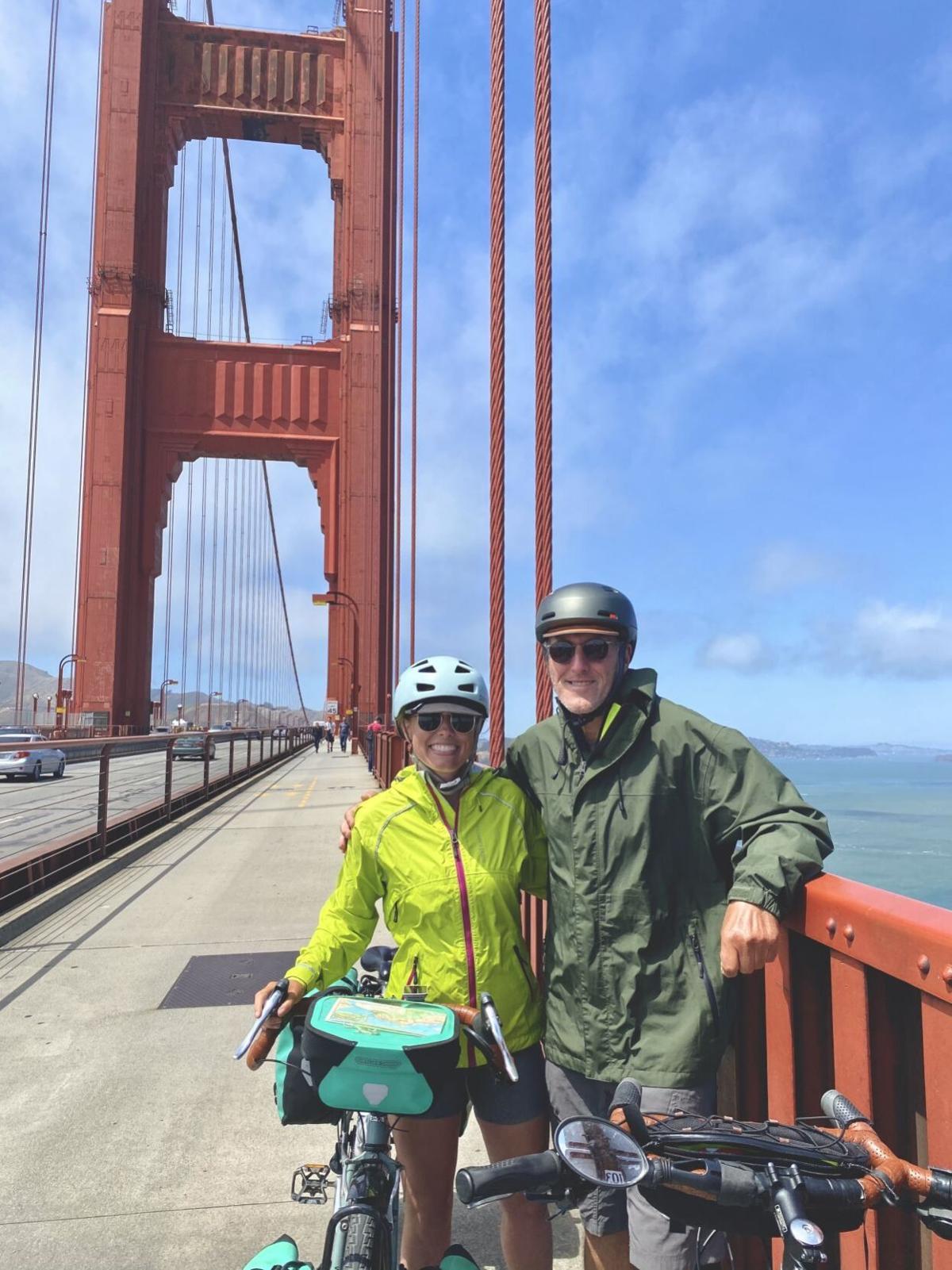 Aspen Gentry (left) and dad, Jerry Carrigan, pose on the Golden Gate Bridge in San Francisco during their bike ride from the U.S.-Canadian border down the Pacific Coast this past summer. The two had previously biked from Oregon to Virginia as part of the TransAmerica Trail nearly 40 years apart. 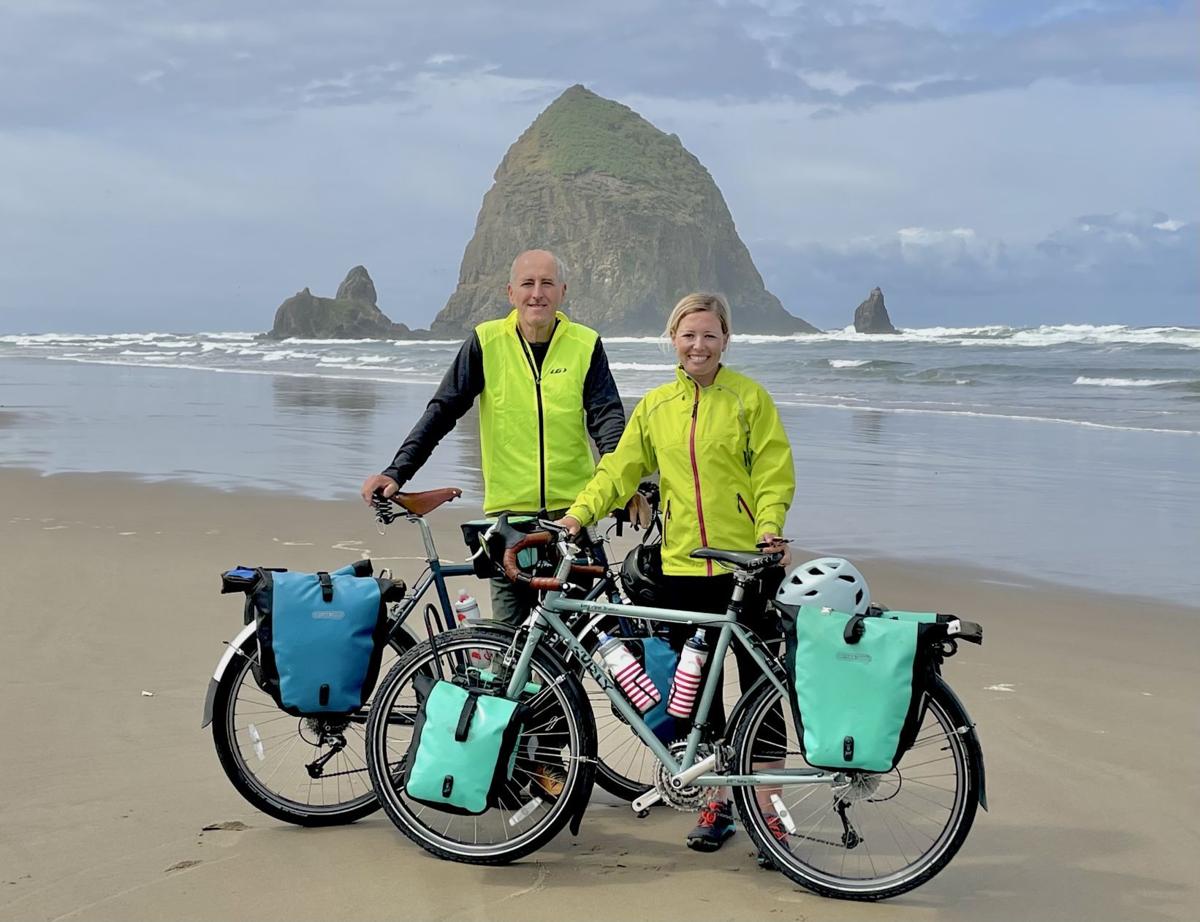 Father and daughter cyclists Jerry Carrigan (left) and Aspen Gentry pose at Cannon Beach, Oregon. The rock in the background of the Pacific Ocean is called Haystack Rock.

Aspen Gentry (left) and dad, Jerry Carrigan, pose on the Golden Gate Bridge in San Francisco during their bike ride from the U.S.-Canadian border down the Pacific Coast this past summer. The two had previously biked from Oregon to Virginia as part of the TransAmerica Trail nearly 40 years apart.

Father and daughter cyclists Jerry Carrigan (left) and Aspen Gentry pose at Cannon Beach, Oregon. The rock in the background of the Pacific Ocean is called Haystack Rock.

In 1981, Jerry Carrigan made the 4,218-mile bike ride called the TransAmerica Trail from Astoria, Oregon to Yorktown, Virginia. Thirty-seven years later, his daughter Aspen made the same ride.

Since the pair had separately ridden coast to coast on their bikes, they figured it would be a nice adventure to make another monumental bike journey together. But having already crossed the country in one direction, they opted to ride border to border along the Pacific Ocean coastline.

“We can say we criss-crossed the country,” Carrigan said.

So this summer for 50 days, from May to mid-July, father and daughter hit the road for more than 1,800 miles from the American-Canadian border to Imperial Beach, California.

Carrigan and Aspen Gentry, a music teacher at Sharpe Elementary School, are veterans when it comes to adventurous biking escapades. They rode a rail trail from Washington, D.C. to Pittsburgh called the C&O and CAP (Great Allegheny Passage) in 2020. Gentry, along with husband Craig, biked the Katy Trail in Missouri, as well as several excursions in and around Land Between the Lakes.

Gentry said she had used Adventure Cycling Association for maps and ideas of places to traverse, eventually settling on the Pacific Coastal trail. “When we were trying to choose which route we wanted to go, it was one of the most popular routes in the United States because it’s so beautiful,” she said.

Their ride took them through Oregon, onto San Francisco and eventually down State Route 1 through the area known as Big Sur. Both Gentry, 31, and Carrigan, 68, claimed the rugged coastline with its misty seaside cliffs as one of their most memorable sites.

“The shoreline is really wild and rocky, and the water is turquoise and there’s wildflowers everywhere. There wasn’t a lot of traffic,” Gentry recalled. “I’m already wanting to go back and ride through that area. It took us a couple of days to ride through there.”

Carrigan added riding through the giant Redwoods was a favorite site, as well, while Gentry was pleasantly surprised crossing the Golden Gate Bridge in San Francisco.

“I’m a very nature-oriented person and I didn’t expect that to be so amazed by that bridge,” she said, “but I enjoyed seeing it and riding over it.”

Other memorable moments were a bit more scary, such as seeing smoke in the distance during one of their rides and being re-directed because of a wildfire.

“Everything’s super dry and as we get closer a police car passes us and he’s yelling at us to turn around,” Gentry recalled. “As soon as he did that, we see flames shoot across the road. Something had sparked a wildfire and we had to re-route. It was blazing hot and we were already dying to get to the next town, so we had to go way out of our way to make it to where we were trying to get to.”

But by the time they got to their destination, residents there were being evacuated.

“When you’re on a bike, it’s different. If you were in a car, you can drive away real fast,” Gentry added. “It was kind of frightening being on a bicycle.”

The two also had to contend with the delta variant of the COVID-19 virus resurgence in California. When they started their ride near the end of May, the pandemic had eased somewhat and more businesses were re-opening. As they got closer to California, however, the coronavirus had reared its head once more.

“We didn’t encounter a whole lot of problems with COVID on the coast this summer but we’d occasionally come to towns that had been shut down,” Gentry said.

Both said long bike trips — or “bike tours” as they are called — are difficult to plan and train for. Aside from logging rides with extra weight for strength work, the first week or two, they said, is when bikers build their “tour legs.”

Also of importance is equipment. They have sturdy steel Surly bikes that can handle tough terrain, and Gentry even took a bike repair course before her own TransAmerica trip three years ago.

Carrigan said they are experienced backpackers and campers and knew what gear, tools and cooking equipment were needed too. Gentry added the Adventure Cycling Association also provides maps with climate and weather information, as well as information on lodging along the route and phone numbers for local officials in case of emergencies.

But a trip can go sideways fast, so flexibility is important. Gentry said she planned her first trip over six months down to the day and accounted for stops along the way. “It went out the window the first day,” she said, “so it messed up my entire schedule. I stopped making these big grand plans ahead of time and just go with whatever comes.”

Keeping tabs on the day-to-day happenings from her first bike tour, she has written an online blog titled, “Aspen’s Wanderings.”

“I just wanted to remember every single day. And there were a lot of people who were interested in the trip and people who wanted to go but couldn’t go, so I felt it was important so they could feel like they were there for the ride,” she said. “I like to go back and read it and remember for what it was.”

And for Carrigan, the Pacific Coast trip was a wonderful memory.

“To be able to do it with my daughter, you couldn’t ask for a better trip.”

So the question remains: Where to next? Gentry said the first day they returned home to Marshall County she texted her dad to see what their next trip would be. They have some options, such as a ride that connects several national parks from Canada into the Grand Tetons, Yellowstone and Rocky Mountains.