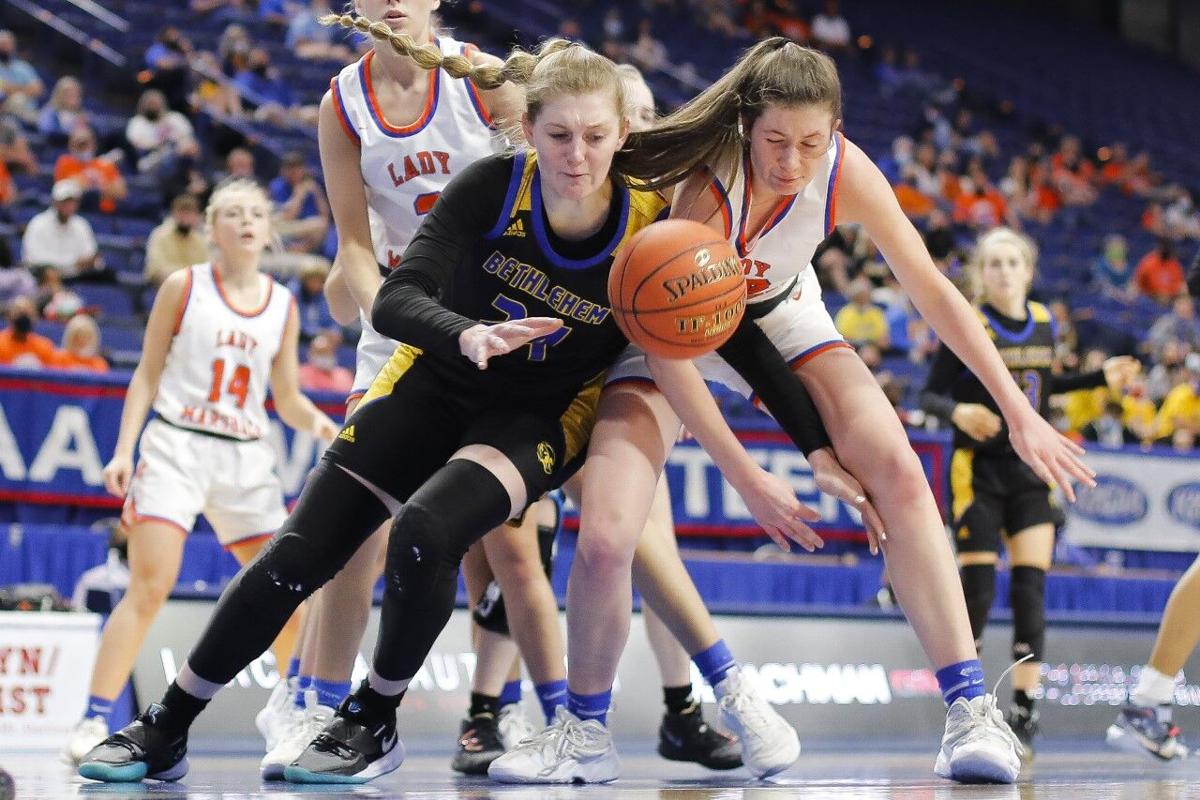 Bethlehem's Emma Filieatreu (24) collides with Marshall County's Halle Langhi while going for a loose ball. The Lady Marshals got 15 key points and 12 boards from Langhi and big contributions all around to win, 58-51, and advance to the Sweet 16 final four today. 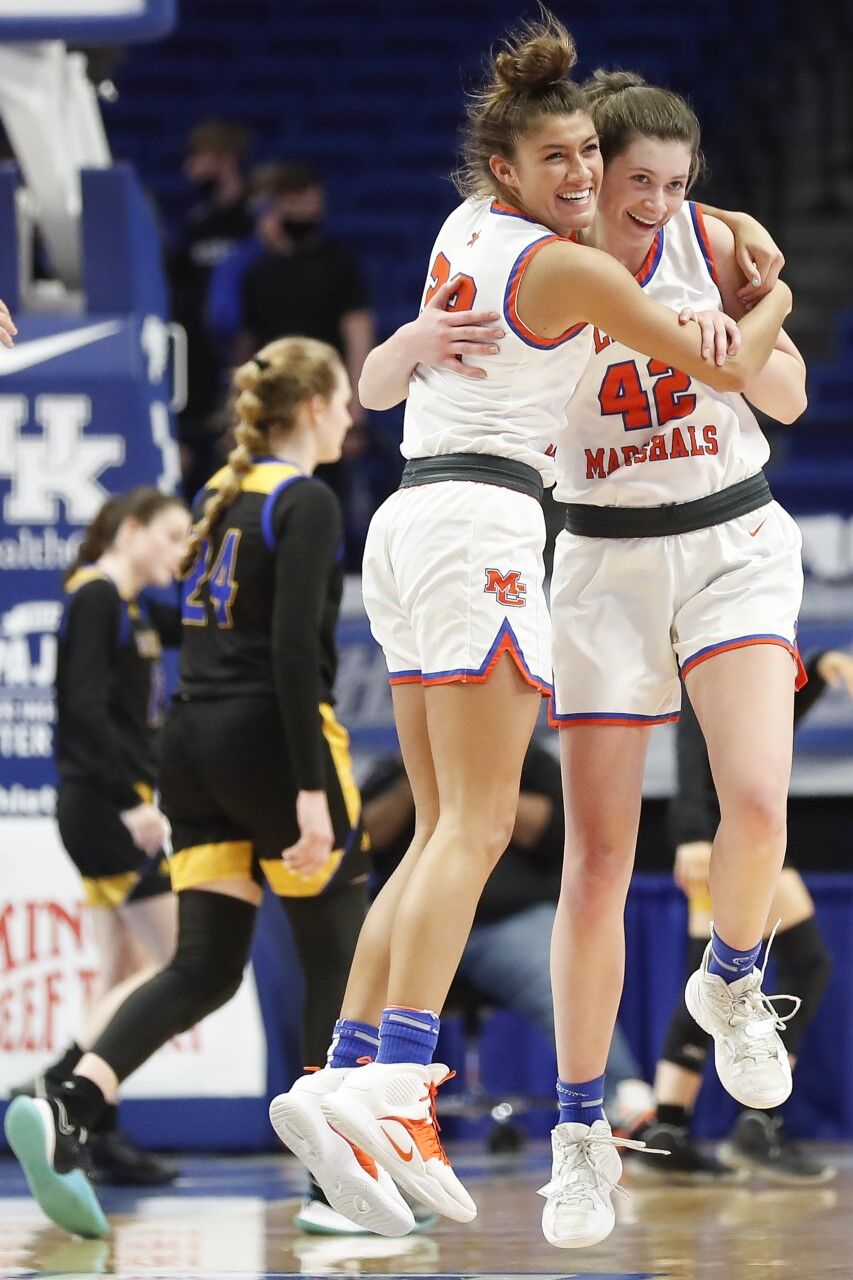 LEXINGTON, Ky. – In Marshall County and Bethlehem’s previous meeting on the hardwood, it was the Lady Marshals’ opening game of the 2021 season and did not go as planned. Playing in Bardstown on the Banshees’ home court, Marshall fell by a 67-60 margin to start things at 0-1.

Fast forward 26 games and things are working out pretty well.

Friday, the Lady Marshals delivered some payback to Bethlehem by the same 7-point margin – 58-51. But even better is the win propelled Marshall County into the Mangua Beef Jerky Girls Sweet 16 state tournament semifinals today at Rupp Arena.

Tip off is set for 1 p.m. CST against either Second Region champion Henderson County or 16th Region winner Russell. The winner between the Lady Marshals and Henderson or Russell will advance to the state championship game tonight.

Marshall County (24-2) knew the task was a tall one, given the Banshees (26-5) featured a high-octane offense that was ranked fourth in the state (68.7 ppg), four players averaging double-digits and combining for more than 52 of those points, as well as a second state All “A” tournament title.

But the Lady Marshals brought the state’s top-rated defense to the table plus a little something extra.

“We knew we had this in us,” head coach Aaron Beth said after the win. “They’re a great basketball team. We knew we had to hold them to around 50 points to win the basketball game. They got 51 but it got the job done.”

Bethlehem leading scorer Ella Thompson earned her 20 points, while teammate Amelia Hodges had to work for her 12 points. No one else on their roster came close to double figures.

“I couldn’t be more proud of my girls for doing what they needed to do, both on offense and defense and playing with that heart and emotion that you’ve got to play with to advance in the state tournament,” Beth added.

Cayson Conner’s “pedal to the metal” playing style typified the heart while her steely demeanor showed more intentness than emotion, even after scoring just four points in the first half but then her roaring back in the final 16 minutes with 20 more points to lead all scorers in the final tally.

Her first field goal came with 1:50 left in the second quarter for a 26-24 lead before Bethlehem reclaimed the lead, 28-26, at intermission. To start the third, she ripped off a 3-pointer and layup. Her final bucket of the period broke a 35-35 tie with 44 ticks left.

A Kentucky Miss Basketball candidate, Conner went two minutes in the final frame where she outscored Bethlehem 10-4 to rallyMarshall from a 45-42 deficit. Those buckets came from a pair of inside shots, a pull-up jumper, two foul shots, and an offensive rebound and put back. She even worked in a pair of key steals later.

“She steps up when she needs to,” Beth said of Conner and her 8-of-13 night from the field and 7-of-8 time at the free throw line. “I know how good she is. She has the ability to take over a game. And the defensive effort, when she came up with those steals down the stretch, were huge.”

This all came after a physical first round game against Pikeville when Conner and her teammates were pummeled but she still delivered a 22-point showing. Conner dismissed any aches and pains carried over into the quarterfinals.

“A couple of us were sore but adrenaline, when you’re playing, you don’t think about that stuff,” she said.

But, as they have shown all season, the Lady Marshals aren’t a one-woman show but they did showcase their long range skills with a 6-of-16 night on 3-pointers. Jada Driver connected back to back in the second quarter that kept the Banshees at bay while Conner, Layne Pea and Presley Jezik also sank treys themselves.

Halle Langhi, a cornerstone under the basket, also showed her range with a 3 of her own that silenced Bethlehem’s faithful after a 5-point run by Ella Thompson got them on their feet to start the fourth.

Langhi was 2-for-9 on triples this season going into the game. “She picked a great time to step back and make a three,” Beth said.

Langhi, who posted 23 points in the prior match against Bethlehem, was also confident in her free throws. A near 74% shooter at the stripe, she was 2-for-7 Thursday against Pikeville. Friday, she made 8 of 10 with six of those in the fourth and finished with 15 points while nabbing 12 rebounds.